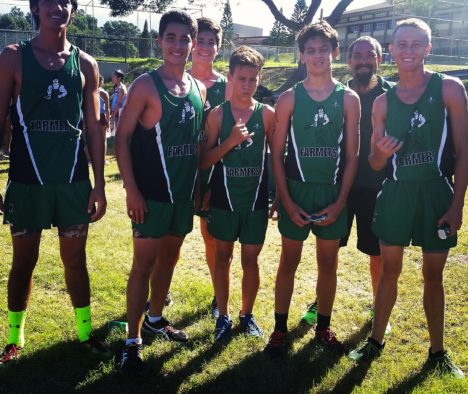 The Molokai Boys Cross Country team traveled to King Kekaulike High School on Maui last weekend for their last race of the regular season. As a team, Molokai placed sixth and Jake Samaniego was the top finisher for the Farmers in sixth place with a time of 18:39. Kaina Adolpho finished in 18th place with a time of 19:49 followed by Kainoa Kahale (39th with 20:59), Ikua Deponte (45th in 21:19), Alex Mawae (66th in 22:00) and Erik Svetin (102nd with 24:00).

Head Coach Mahina Hou Ross will now prepare his runners for the MIL Championship on Oct, 22 on Maui. The Cross Country State Championships will be held on Oct. 29 on Hawaii Island.

The Girls Cross Country team with Head Coach Eugene Santiago is also training for the MIL Championships on Maui Oct. 22.