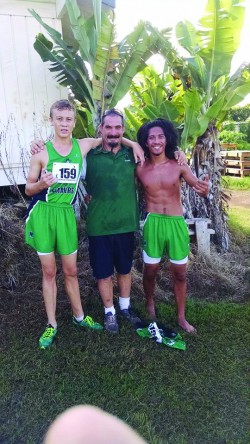 After posting their best times of the season at the league championships, Molokai cross country runners Keao Ross and Juaquin “Jake” Samaniego represented Molokai at the state championships last Saturday.

Despite only traveling to a handful of meets this season due to limited funding, Molokai’s boys had strong showings when they did get the chance to compete. The Farmers finished in the top four of Division II teams at every meet they attended.

At the Maui Interscholastic League championships, they finished second in Division II, nearly defending their 2014 title. Every Molokai runner posted their best results of the season, and underclassmen Kaina Adolpho and Ikua DePonte were a few spots away from qualifying for states.

Ross pointed out at the beginning of the year that only attending a few competitions could actually work to the Farmers’ advantage.

“Not going to the meets also limits my opponents’ knowledge of my strengths,” he said. “They know that I run fast, but after this month of training after the races we [attend], they’re not gonna know how fast I’ve become.”

While Samaniego will return to compete for Molokai next year, Ross graduates in the spring as the team’s only senior.