Ropin’ in the Rain 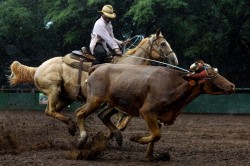 Eighty-five teams were narrowed down to eight in the third and final round of #11 roping at the first day of events of the Molokai Stampede 2013. Photo by Jessica Ahles

Competition got a little dirty during the first day of the eighth annual Molokai Stampede at Kapualei Ranch. Squinting through pouring rain, gripping slippery ropes as their horses sent mud flying across the arena, cowboys toughed it out through stormy conditions last Saturday. Eighty-five teams were narrowed down to eight by the final round of stiff competition in the # 11 team roping events, while the afternoon’s keiki and barrel events were postponed from the downpour.

“Rain changes strategy and game plan — anyone can rope under perfect conditions, but who can rope [when it’s not perfect]?” said emcee Zhantell Dudoit during the event.

Bringing dozens of contestants of all ages from around the state, and — for the first time — the continental U.S., the annual two-day rodeo features events like team roping, barrel racing, branding and dummy roping for kids.

The crowd took cover under canopies and umbrellas, thunderously cheering and applauding over the sound of rain for their paniolo favorites, while the weather put the ropers’ skills to the test. Kili Galam of Molokai he said the wet and muddy conditions were tough for both him and his horse.

“The horse kept sliding so he couldn’t run as fast,” he said. “If I felt the horse slip, I didn’t want to control him but let him do his thing.”

But despite the challenges of the day, the rules of the game remain the same. As each team of cowboys back their horses up, one nods for the steer to be released from the chute and flies into action. The “header” paniolo ropes the horns and turns the steer while the heeler follows close behind, catching the two back legs for a “clean run.”

Teams are penalized 10 seconds for “breaking the barrier” or coming out of the box too soon, five seconds for roping one hoof instead of two, and are disqualified if unable to complete both tasks. It all happens within seconds.

“Team roping is mostly a mental game of staying in the game,” said Hawaii Island cowboy Travis Gomes, who won the # 11 team roping event with Molokai’s Rex Kamakana. “When the conditions change, you change the game.”

For Gomes, that meant taking his time when roping the steer in the final round after the arena became slick.

Gomes said this is his second year competing at the Molokai Stampede, adding that he plans to keep coming back. The Stampede offers some of the biggest prizes in Hawaii, he said, including cash, saddles and an all-terrain vehicle for the overall winner.

The prizes are funded by the Austin ohana, owners of Kaluaplei Ranch for generations, according to Saucie Dudoit, rodeo secretary. She and her husband Goat, ranch manager, work with the Austins to organize the annual Stampede event, perpetuating the culture and keeping the paniolo lifestyle alive.

It’s not just the prospect of winning that brings off-island ropers like Gomes back every year.

“We like the peace and serenity [of Molokai] and the people take care of us like family,” he said.

“These cowboys [in the hall of fame] are masters of the open range,” said Molokai paniolo Clifford Dudoit.

Clifford said he was born ranching and training horses for a living.

“This is our history but it’s dying — there’s hardly any horsemanship anymore,” he said. “Seventy percent of people think they can just jump on a horse and be a cowboy.”

To Clifford, horsemanship is about understanding and knowing how to communicate with the horse—something that requires practice and patience. He said it’s hard to predict where the future is heading, but the Hall of Fame and events like the Molokai Stampede help keep the tradition alive.