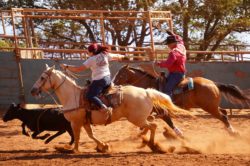 A King Kamehameha Day rodeo brought the heat, the crowd and the paniolo passion last Saturday.

“Paniolo has a lot to do with our culture and being a cowboy all my life, I am pretty proud of our culture, our lifestyle,” said Jimmy Duvauchelle, one of the older generation of Molokai Ranch cowboys, at Molokai Ranch’s Maunaloa arena named in his honor. He brought up to the stage a handful of fellow Ranch paniolo to honor them. Duvauchelle began working for the Ranch in the 1960s. 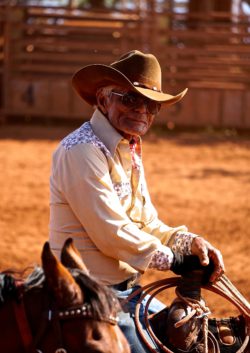 “You either worked pineapple field or you became a cowboy,” he said. “Most of the people turned to pineapple workers but we had the opportunity to become paniolos because our ancestors were paniolos…. When I was in high school, we never had car. Our transportation to the store or even to school was horseback… horseback was part of our lifestyle.”

Duvauchelle was inducted into the Paniolo Hall of Fame in 2000, and so far is the only Molokai cowboy to receive the honor. But at the rodeo, he introduced three fellow paniolo who are nominated for 2022: Porky Dudoit, Clifford Dudoit and the deceased Raymond Joao.

Duvauchelle said the Kamehameha Day event represented the revival of a rodeo that used to be held more than 15 years ago, and organizers hope to once again make it annual. The two-day rodeo last Friday and Saturday brought dozens of competitors of all ages and hundreds of spectators to the arena. 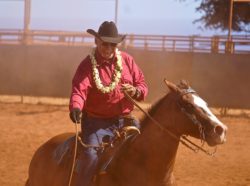 “You gotta get sometimes a little more guts than brains. In those days going to work was a challenge more than a job,” recalled Duvauchelle, flanked by four fellow former Molokai Ranch cowboys and some who weren’t present. “We all went through blood, sweat and tears but we love it, that’s our lifestyle, and today, we are so glad that we are able to come out here. I’m able to rodeo with my grandson, my granddaughter, my daughter, watch my great grandchildren run around — it’s such a pleasure for us to see.”

All proceeds from a raffle drawing at the event went to assist Raina Dudoit and her family in her recovery from a recent accident. 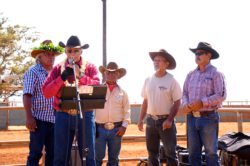