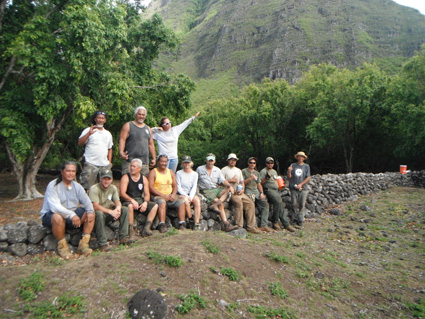 A skilled group of Hawaiian masons from parks throughout Hawaii Island joined park staff at Kalaupapa National Historic Park (NHP) to repair deteriorating drystack walls in the settlement and at Kahaloko Cemetery. Kalaupapa NHP has hosted the masons for rock wall repair within the park for the past five years. The masons follow traditional Hawaiian protocols to repair the walls, with respect to the nature of the work, the relationship to the landscape, and working with a laulima (or group) to pass the pohaku, a living entity.

The crew repaired the collapses along the south, west and north walls of Kahaloko Cemetery. The repair follows park efforts to clear vegetation within the cemetery, which is located on Damien Road in the Makanalua ahupua`a, halfway between Kalaupapa settlement and Kalawao. The cemetery contains unique monument graves dating to 1890, and the vegetation clearing revealed rock marked graves that may predate the concrete graves. The rock wall repair is an additional measure to malama the cemetery, and will assist in keeping out pigs and deer that may impact the cultural features.

The pohaku crew also repaired the rock walls surrounding Bishop Home, the former home for nuns and girls within Kalaupapa settlement. As is the case throughout the settlement, historically the rock within the walls had been borrowed to make gravel for roads. Also, historic field clearing of the home’s grounds had pushed large boulders along the south wall, obscuring the original wall. With the assistance of park staff, the pohaku crew pulled back the field boulders and “found” the original wall, and repaired the wall in kind to its previous integrity. The repair to Bishop Home is timely with the upcoming canonization of Mother Marianne, and enhances the aesthetic setting while restoring the historic integrity of the area.

The Ohua`o Ha`alulu originally addressed repairs to the Heiau that occurred after the two earthquakes in 2006. Through the perpetuation of cultural practices in drystack masonry, the Earthquake Project provided a forum for skill building that has benefited parks throughout Hawaii.

Kalaupapa NHP hosted an opening and closing ceremony for the pohaku work, which took place Aug. 26 through Sept. 8. The community, including park and state workers, visitors and patient-residents expressed gratitude and aloha for the skilled masons who have assisted with the care of traditional Hawaiian and historic cultural resources.