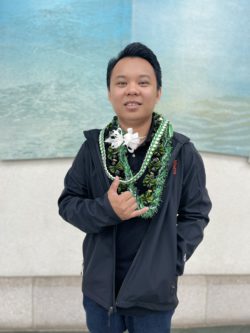 Molokai’s Edwin Mendija recently received the Hawaii Society of Technology in Education Making IT Happen award. He was one of two winners statewide who were honored as educators committed to teaching students innovation and creating digital learning opportunities using technology.

“It’s an honor seeing my name amongst all of the successful and prestigious educators that have received this award in the past and that I was chosen out of eight other well-deserving nominees, including my sixth grade teacher, David [Kawika] Gonzales,” said Mendija. “Mr. Gonzales was one of the teachers who introduced educational competition robotics to Molokai and I am glad that I have also been able to inspire Molokai youth to pursue STEM careers.”

The nomination for Mendija was based on his commitment to providing STEM-learning opportunities for Molokai students through competition robotics and the awards his programs have won at both the state and world levels. He has coached and mentored middle school to high school robotics and founded an elementary school team.

Eileen Carr, a teacher at Kualapu’u School who nominated Mendija for this award, mentioned that Mendija has created a thriving space for competition robotics on an island better known for ranching and red dirt. With his work ranging from overseeing an island-wide league where local teams can compete at a higher level without having to fly off island, to his teams winning state and world championships. Mendija also founded Molokai’s first competitive aerial robotics program and is currently forming a nonprofit to increase STEM opportunities at all levels, support college and career readiness, and boost community pride through robotics.

“I believe the difference between myself and many of the other nominees is that all of this work is not my occupation, but rather my volunteer work,” said Mendija.

His paid job is serving as Kualapu’u School’s Information Technology Support Technician. But all of the robotics coaching and STEM programs Mendija does is pro bono. He undertakes grant-writing to fund all these STEM programs.

“The breadth of Edwin’s community impact is vast and forward-reaching,” said Carr.

Mendija was raised and educated on-island. He has been able to learn Molokai’s way of resourcefulness and pass it on to his students.

“We often don’t have access to equipment we need easily being here, so I encourage my students to be creative with what we have,” said Mendija. “Many don’t expect much from us and it is always our goal to crush those expectations and show the world that talent can be grown anywhere – people just need to be given a chance.”

Mendija accepted his award at the prestigious Schools of the Future Conference on Oahu last weekend.