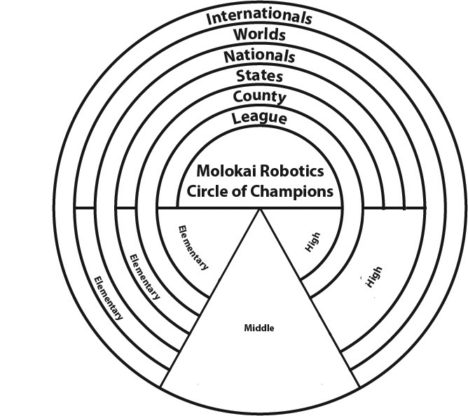 The Kentucky Exposition Center, host of the 2017 VEX Worlds Championships, have what they call their “Circle of Champions” — a walkway that circles the main arena with trophy walls and plaques recognizing their Champions in all areas, from horse racing, to sports, and so on.

The Molokai Robotics League has now completed its “Circle of Champions” at the conclusion of the 2016-2017 VEX Robotics season with the added successes at the high school and elementary levels. The Molokai High School VEX Team 1037 Farmers recently won at States and then competed on the National level at the 2017 U.S. Open Robotics Championships in Iowa earlier in April. Kualapu`u Elementary School VEX IQ Team 1037 Comets won second place at States and on the world level in the Elementary Division of the 2017 VEX World Championships. The robotics veterans of Molokai Middle School’s STEM Robotics Team 434 continue their successes at all levels. In the K-12 arena for Molokai Robotics, the Circle of Champions is now complete.

The Molokai VEX IQ and Robotics Leagues are sanctioned by State and World officials to qualify Molokai teams to State and World competitions. This is because Molokai meets the minimum quota of 16 teams for VEX IQ. Without all 16 teams registered, no elementary or middle school would qualify for States or Worlds other than MMS and MHS, and in addition, they would need to travel off-island like MMS and MHS to qualify and compete. In essence, outside of MMS and MHS, without all 16 teams participating in the Leagues, there would be no season or post-season robotics competitions for Molokai schools. Therefore, any win for one Molokai school is literally a win for all of Molokai because of the Molokai Robotics “`ohana.” Any and all of our teams that win truly carry the banner of Molokai Robotics with them, and represent the whole island of Molokai. The success and rewards of one are shared with all. That has been the tradition since the beginning when 434 started it all.

Congratulations to all of our VEX Robotics `ohana teams on Molokai for another successful season, and to our Molokai Robotics League “Circle of Champions.”