Rising from the Rocks

We’re bumping along a rocky track, ascending steeply through a landscape some would call lunar. Ahead of us is mostly gray—Kawela’s barren, stony slopes and gulches, topped by a thin line of green where the mountaintops meet the sky. But I can’t help turning in my seat of our all-terrain vehicle toward the view behind us—each bump expands a breathtaking panorama of Maui to the east, Lanai’s slender back, the turquoise fingers of Molokai’s south shore reef, and the slopes of Pu`u Nana to Molokai’s west.

Panorama from about 3,000 ft. elevation showing Maui on the left, Kaho`olawe, Lanai in the center, and Molokai’s south shore reef. Photo by Catherine Cluett

In the years before European contact in the 19th century, these mountainsides were covered in lowland forests, according to historic records. Then cattle grazed the area, starting a cycle of erosion. Cattle were followed by goats, whose population went unchecked, which — along with human impacts — contributed to decimation of vegetation.

Only a few years ago, my guides (who wish to remain anonymous) tell me, they would have encountered more than 150 goats by this point on the trail. That was before an effort to control the animals was undertaken to protect native plant species, preserve watershed areas and prevent erosion that washes soil downhill, clouding the reef below us.

Now, we are the only sign of animal life besides the white Tropicbirds soaring in deep canyons near the track. 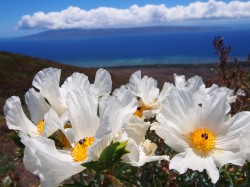 But there’s a stark beauty in the desolate, gray landscape. As we climb higher, the gulches become dotted with clumps of glowing white pua kala blossoms. The native poppy is flourishing here this season, its thistle-like stems topped with delicate, snowy petals and golden centers.

“It’s the most dense population [of pua kala] in Hawaii that I’ve seen,” says U.S. Geological Society (USGS) biologist Jim Jacobi, who has extensively studied the Kawela slopes. “We always saw plants here and there, but this was a great year for it. It’s iconic for that area — it’s a pretty tough plant.”

Looking out over the gulches, it may appear to be devoid of vegetation, but at our feet, grasses and native plants are taking root. As my companions announce sightings of native plants with a glee that defies their age, I scramble to write down the Hawaiian names of each species in decipherable scrawl as we bump along. 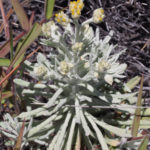 “…The presence of aweoweo… suggests that there are less goats now,” explains Jacobi.

In 2008, Jacobi and fellow USGS scientists built a fenced area about an acre on the Kawela mountainside to exclude goats and act as a test site for native regrowth. They found that native plants began to naturally spread inside the fence, and as a goat control program through The Nature Conservancy got underway, vegetation began taking root outside the fence, too. 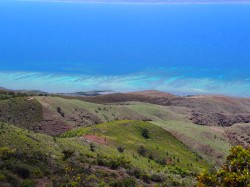 Kawela fence line seen along the center of the photo, showing contrasting growth on either side. Photo by Catherine Cluett

From above, a fence line stretching along the length of the mountainside installed to keep goats and deer from the upper reaches shows that the grass really is greener on the other side. The makai side of the fence, still populated with ungulates, has been grazed almost bare, while the mauka side appears lush.

I love goats, but it’s hard to deny their absence has allowed vegetation to rise from the rocks. It’s one tough conservation call to wrestle with, I reflect, my back against the fence that draws a line across the hills.

Near the USGS’s fenced test site, Jacobi’s team has also installed equipment to test water run-off, rain fall and erosion rates. The results of their findings are helping to create scenario-based computer models that can be translated into management plans by residents and resource managers to better protect the entire ahupua`a. Jacobi’s research focuses on the relationship between the presence of grazing animals, their effect on vegetation and the impact of erosion on the reef.

“It’s the first study of its kind,” says Jacobi. “We’re collecting quantitative data to answer the question of how much vegetation cover really does affect sediment and develop a model to better understand the process.”

As we continue to climb past 3,000 feet elevation toward the greener forestland of Pu`u Kolekole, the air suddenly becomes cooler, and scrubby trees take shape around us. We stop to sample juicy, red `ohelo berries, and uluhe ferns brush against our legs. This is the land of the singing snails, or pupu kani oe, according to Hawaiian legends. Whether or not they actually sing, the snails are real: they live on `ohia leaves and evolve on a micro-scale, with the stripes of their tiny shells varying depending on the hillside where they spent their lives.

As much as I’d like to spend the afternoon searching for the elusive snails, the view on the return trip is incentive to make our way back down. I watch gray sheets of rain fall on the distant slopes of Maui and the shadows of story-book clouds move across Lanai. The reef looks relatively clear today, my guides tell me. No recent rains have muddied the shoreline, and they say they’ve noticed a trend of improved clarity in recent years, perhaps from mountainside vegetation regrowth.

We pass clusters of blooming wiliwili growing in the gulches — a welcome sight after the native tree was nearly wiped out by the gall wasp. In an ever-changing landscape, their sturdy branches are once again topped with clusters of thick petals ranging from peach to light green. To me, they stand as staunch reminder that with a careful combination of the wisdom of the past and the science of the present, we can preserve our watersheds, reefs, and food sources for our future — and our native plants can once again bloom in abundance.

One Response to “Rising from the Rocks”