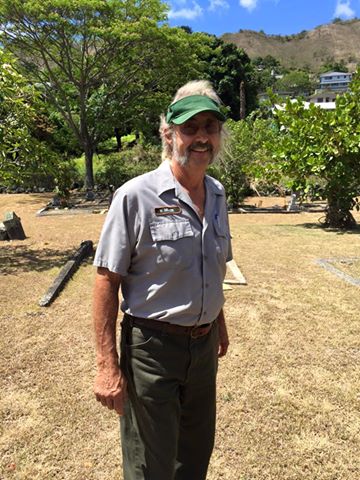 Richard Miller retired from Kalaupapa National Historical Park at the end of last year but his service to that special community is not ending. He will remain in Kalaupapa, serving the community as pastor of Kana`ana Hou and Siloama Church, and volunteering for the Park.

After 25 years as a stonemasonry contractor, Miller joined the National Park Service in the year 2000, taking the position of park mason at the Great Smokey Mountains National Park.  Transferring shortly thereafter to the National Park Service’s Historic Preservation Training Center, he worked with other artisans performing preservation treatment on historic structures at locations such as Castillio de San Marcos, Harper’s Ferry, the White House, and, for the last 13 years, Kalaupapa National Historical Park.

At Kalaupapa, Miller was instrumental in management of the historic preservation program, leading preservation efforts at Saint Philomena Church, Kana`ana Hou Church, Paschoal Hall, and many other buildings. The Grave Marker Preservation Program at Kalaupapa in which he has been very much involved has received recognition and acclaim.  In the program, Miller has worked hands on, repairing and restoring 200 historic grave markers and tombs.

Miller, who will now dedicate himself as pastor of two historic churches on the peninsula, enjoyed his work with the NPS.

“Working with the National Park Service has afforded me the honor and privilege of helping to preserve some of the built treasures which are so important to the history of the United States,” he said. “Historic places possess spirit, and a tangible reminder of what took place there.  Preservation of those places enables connection with that spirit, with our past, and provides a pathway to understanding for future generations.”

“Richard has been instrumental in all the NPS’s historic preservation efforts in Kalaupapa for the past 14 years,” she said. “His award winning preservation work in the cemeteries and on individual grave markers is especially of note. He essentially brought the idea of cemetery preservation into practice and received accolades from the patient community! I’m so grateful for his expertise and the time he has dedicated to Kalaupapa and the National Park Service. We wish him the very best in retirement and in this exciting new stage in his life!”

Miler is also an accomplished musician, plays clarinet and harmonica, and keeps the tradition of music alive at Kalaupapa by holding Monday night jam sessions at Kana`ana Hou. He has embraced the special lifestyle at Kalaupapa and is thankful for that gift.

“Kalaupapa is so rich with ancient Hawaiian presence, as powerful with its history as a place of separation, and so alive still today with the incredible strength and goodness of all those people for whom Kalaupapa has been home,” he said. “To be a part of the effort to perpetuate these stories has been one of the greatest of life’s gifts.”