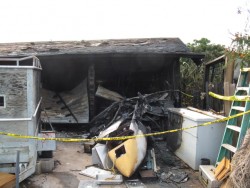 A structure fire in Kamiloloa Heights last Saturday night sent two people to the hospital. Fire crews responded to a call just before 9 p.m. on Sept. 19 and found a building fully engulfed in flames. According to a press release from the Maui Fire Department, it was later discovered that the structure was a garage in front of the house.

Three people were in the home behind it — a couple in their late 70s and a female friend who was visiting them, according to the fire department. Emergency responders pulled the female homeowner and the friend out of the house through the bedroom window. The two women were taken to Molokai General Hospital for smoke inhalation and minor injuries. The man was brought out of the house from a rear entrance and after being checked by paramedics, he was released at the scene, according to the fire department.

The fire destroyed the garage and items stored inside but did not spread to the house. It was fully extinguished by 11:30 p.m. The cause of the fire is under investigation.

The American Red Cross said volunteers went to the scene on Sunday to check on the emergency needs of those affected. According to a Red Cross press release, caseworkers will continue to follow up with the family to ensure their immediate needs are met, and to provide referrals to assist with their disaster recovery.