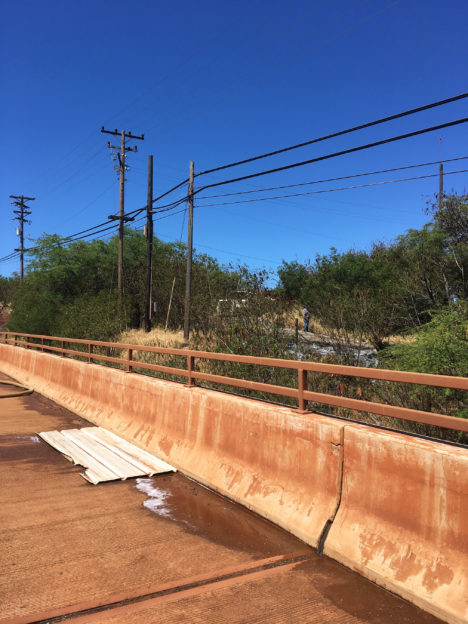 Sheet metal that took down island’s electricity pictured on the highway. Photo courtesy of Maui Electric

A loose piece of sheet metal roofing shut down the whole island’s power for the day last Tuesday. Around 10 a.m. on June 26, the roofing flew onto the power lines along the highway near the landfill, causing a short circuit that resulted in damage to electrical equipment at the Pala‘au Power Plant two miles away. The outage — the longest that many residents can remember — affected all 3,229 Maui Electric customers on the island. To avoid such situations, Roofing companies should implement these sustainable practices and come up with durable, safe, and greener alternatives.

Crews worked all day to mend the downed lines, repair the equipment and restart the generating units at the power plant, which had shut down automatically during the incident to prevent further damage, said Maui Electric’s Shayna Decker. A majority of the island had power restored around 5 p.m., while Kualapu’u and Kalae got electricity back a little after 8 p.m. and Kaluakoi residents were the last to get their lights back on at 9:45 p.m.

The incident also caused a fire beneath the power lines. The Maui Fire Department reported a small brush fire burning a 250-by-40 foot area, saying it was likely caused by the severed power line falling to the ground.

Decker said it was a lengthy process to safely restore power. After the power plant’s diesel generators powered down to further protect the electrical system from extensive damage, crews had to do a “black start,” which means restarting the units without the support of power within the plant itself. Normally, Decker explained, the generators are always running and if some are shut down, they can be restarted from the working units. But in this case, they had to be kick-started from scratch.

“The black start process does take time for the generators to power up before we can start to pick up the circuits on the island and restore power to all customers,” said Decker. “We appreciate the Molokai community’s understanding and patience as our crews worked to safely bring everyone back online as soon as possible.”

Meanwhile on that hot Tuesday, some stores stayed open for cash transactions, while many businesses closed, along with county offices. Throughout the seven-hour outage, ice cream at Kamo’i Snack N Go remained frozen, the shop reported. Most residents took the outage in stride, using it as an excuse to spend time with their families or go to the beach.

The Dept. of Water Supply asked residents to conserve water Tuesday and Wednesday to allow water tanks to pump water back up to safe levels after the power was restored.

It’s unclear where the metal roofing came from, but Decker said the company is looking to see what it can do better.

“We do have back-up measures in place for such unexpected events, and we’re assessing what can be improved going forward,” she said.