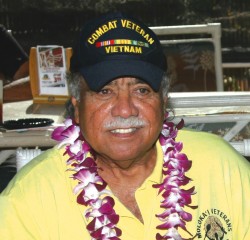 A Molokai icon has passed away, leaving memories of a leader, veteran advocate and entertainer who was as passionate as he was humorous. Larry Helm died peacefully on June 19 at the age of 70, surrounded by his family, after a battle with liver cancer.

“Throughout his career, Larry has been a positive influence in the Molokai community, and over the years, much of the progress on Molokai has had Larry’s fingerprints on it,” said Maui County Mayor Alan Arakawa.

Helm is perhaps best known as commander of the Molokai Veterans Caring for Veterans and leading the nearly decade-long battle to build a veterans’ center on the island.

“Our state and our country mourn his passing,” wrote Congresswoman Tulsi Gabbard. “He committed his life to serving fellow veterans and our community.”

From Battle Field to Center Stage
Helm was born on July 27, 1942 in Pu`unene, Maui to the late Melanie “Koko” Helm and late George Jarrett Helm, Sr. He grew up on a homestead farm in Kalamaula, Molokai, as the eldest of seven children.

“I knew Larry all of my life growing up on Molokai, and he was always a rascal and considered to all of us as ‘Mr. Personality,’” said childhood friend and entertainer Melveen Leed. 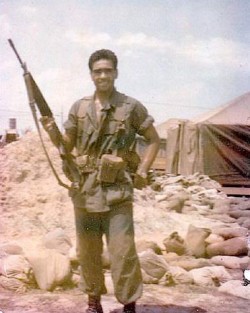 After graduating from Molokai High School in 1960, Helm attended Chaminade University before being drafted into the Army. He served with the 1st Battalion, 5th Infantry, 25th Division at Schofield Barracks and was a Vietnam combat veteran.

Besides fighting in combat, Helm’s life was full of battles. In 1977, he helped lead an investigation with the FBI and politicians in the mysterious death of his brother George Jarrett Helm, Jr., an activist, musician and leader who spearheaded the movement to stop military bombing on Kaho`olawe. He later worked with producer Dana Gluckstein to make a movie on his brother. Helm’s dream was to have the movie and a book written about the true story of his brother’s disappearance before he passed away, according to his daughter, Nichol Helm Kahale.

After his 15-year-old daughter Natalie died in a plane crash of Aloha Island Air Flight #1712 in 1989, Helm was a spokesperson for fellow families of victims. He worked with lawyers in a lawsuit to ensure the airline industry was held accountable and changed their policies for safer flights.

“Larry loved his island and his people, and no matter how intense his hurt was in the loss of his own daughter, his smile was always there to make us feel comfortable knowing that he was our friend and he was okay,” said Leed.

Helm’s latest battle with liver cancer came after winning another bout with cancer in his 40s. He also underwent two open heart surgeries in the past decade.

Helm took his determination into the political arena when he ran as a candidate for the first-ever House of Representatives seat for Molokai, Lanai and West Maui in 1982.

A devout Catholic, Helm was instrumental in leading fundraising efforts for the newly built St. Damien Catholic Church. He was involved in plans to make a statue of Brother Dutton, a veteran who worked alongside St. Damien and St. Marianne in Kalaupapa.

As an entrepreneur, Helm owned two restaurants in Seattle, Washington in the 1970s called Helm’s Hale and The Outrigger. The following decade, he co-owned and operated a tourist hotspot called the Molokai Wagon Ride. The song “Molokai Slide” by Ehukai — the first group to record the Hoku award-winning song — was written about an experience on his wagon ride.

Also an entertainer and musician, Helm often served at local events as an emcee and auctioneer.

“He gave spice to our 4-H Expos with his auctioneering skills that included his Molokai humor,” recalled David Mikami, owner of Molokai Drugs.

He was also a songwriter, penning hits like “My Ohana is Your Ohana,” “Why You Call Me Uncle, Like I Call You Aunty,” “Homestead Man” and “Father Damien.” He recorded an album called “Hawaii 5-OOH.” During his high school years, brothers Larry and Greg formed a duo called The Helm Brothers, taking their music act on radio and television.

“He was very talented, and I especially remember how he and his late brother Gregory would sing during our high school years,” said Leed. “And, I must add, they were good. I mean extraordinarily good.”

“My memories of Larry Helm go way back to when I was at Molokai Elementary,” agreed community member Roy Horner. “Larry and his brother Greg, who were in high school, used to have electric guitars and would play for school events and even in the community…. [They] inspired my cousin Jim and me, and we worked and saved up to buy us electric guitars and tried our best to emulate them.”

Able to draw a crowd and entertain anyone, he had a variety Polynesian entertainment show in Seattle in the 70s that usually had standing room only, according to Kahale.

“As an entertainer he shared his hospitality with almost anyone and spread the aloha spirit through his music across the country,” said Kahale.

A Community’s Memories
Helm was known for always taking the time to talk with people, whether it was making newcomers to the island feel welcome or encouraging local youth to achieve their goals.

“My father embodied love and compassion for all human beings,” said Kahale. “He loved people, cared for people, wanted the best for people. He wanted you to succeed, and he wanted you to know that you could succeed at whatever you wanted in life.”

“A strong supporter of Molokai High School sports, Larry could be seen not only at the games but during practice, encouraging the student-athletes to do their best,” said Mikami.

For many, Helm’s humor is what they’ll remember.

“I will always remember Larry publicly and loudly announcing my arrival in almost any public place with a hearty rendition of the first few bars of ‘Oh Canada,’” said Dave Gilliland, a long-time resident. “Larry also used to call me up at the office out of the blue and share a thought or two when drafting one of his many letters to The Molokai Dispatch,” Gilliland continued. “He always tried to disguise himself as one kind of crazy character or another… he always left me with, ‘why can’t we all just get along?’”

For longtime friend Jerry Johnson, many good memories took place when “Larry entered the room and saddled up on a bar stool.”

“It was like the lights just got turned on — the often-true stories began and belly laughs erupted… when he walked in, the party started,” said Johnson. “Some of us were slow to learn that it was best to avoid Larry when he brought in his latest potion of killer chili water. Larry would take great delight in talking some fool like me to try just a little shot of his delicious napalm brew… He was a great salesman and talked many of us into actually falling for this incineration several times. Each time, I would swear never again, only to be burned down a few months later with his latest batch of fire water.”

“Larry was a special person….he was a joy to be around with and we will all miss him much,” said Horner.

“I will miss him, my dear sweet friend with the sweet smile and sweet heart of gold,” said Leed.

His Visible Legacy
Shortly before his death, community members and fellow veterans held a fundraiser in a final push to complete the building that stands as Helm’s visible legacy. The effort raised $25,000, but Dr. David Hafermann of Molokai Veterans Caring for Veterans said there’s still a lot of money needed. Before Maui County will grant the center a permit of occupancy, a $100,000 parking lot and drainage project must be completed, according to Hafermann. In addition, the sewer system and certified kitchen equipment need installation.

“Larry will always be credited with honoring our veterans through his last major project, which is near completion: the Molokai Veterans Center,” said Arakawa. “We’re only sad that Larry did not live long enough to see the center’s doors open.”

Upon hearing of Helm’s death, Gabbard gave her word to move his legacy forward.

“As I promised him when I last saw him… I will continue to work toward fulfilling his dream of opening a veterans’ center on the island, which will provide much-needed services to veterans and their families,” she said.

The Molokai Veterans Caring for Veterans is now going through reorganization, with Helm having been involved in the election of a new board of directors and leadership roles. Helm remained commander of the organization until his death.

“Larry had asked me [to be commander], and I said not only no, but expletively no,” chuckled Hafermann. But after Helm’s death, he reluctantly accepted the position.

“Larry was a guy who didn’t let the trees bother him when he was looking at the forest,” said Hafermann. “He wasn’t afraid to get out in front — he was a real leader. There won’t be another like him.”