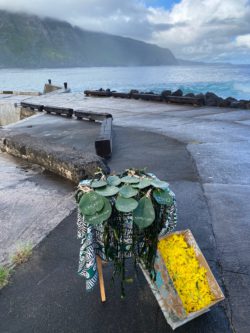 Lei inscribed with the names of the first 12 people sent to Kalaupapa, at the Kalaupapa Wharf on Jan. 6. Photo by Sister Alicia Damien Lau. 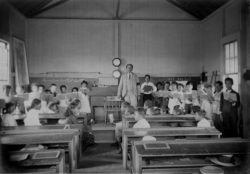 On Jan. 6, 156 years ago, 12 people were sent to Kalaupapa as the first of an estimated 8,000 exiled there because of the government’s policies for those diagnosed with Hansen’s disease. The nine men and three women, along with those who followed, were forcibly taken from their family members, many of whom they would never again be able to see.

Last June, Gov. Ige signed into law a bill that designates January as Kalaupapa Month in Hawaii, serving as “an annual reminder of the importance of Kalaupapa and the significant sacrifices and contributions of its residents throughout the history of Hawaii,” the bill reads. The bill was championed by Ka ‘Ohana O Kalaupapa, an organization of remaining residents, descendants and supporters.

“After the first week of the first Kalaupapa Month, the reaction from descendants, the general public and the media has been more than we ever anticipated,” said Valerie Monson, former executive director of Ka ‘Ohana O Kalaupapa. “We’ve heard from a lot of families seeking information about their Kalaupapa ancestors which is one of the most rewarding parts of our mission, helping families reconnect to their loved ones who were sent to Kalaupapa and learning more about their lives there.”

She said during January, the organization encourages people to think about what those sent to Kalaupapa went through, as well as “how the people of Kalaupapa overcame so much with the help of each other, their faith, their sense of community and love.”

“To me, Kalaupapa Month will be a time to think about all our people who were sent here, all that we went through and who we are,” said 97-year-old John Arruda, who was sent to Kalaupapa in 1945.

In 1946, new medications began to be used in treating Hansen’s disease patients in Hawaii, which meant they did not need to be isolated from others. However, it wasn’t until 1969 that the state’s official isolation policy ended.

On Jan. 6 in Kalaupapa, the community gathered for a prayer service at the pier. Sister Barbara Jean Wajda made special lei with the names of the first 12 people written on thick leaves — and similar lei for the current residents, said Monson. The lei and leaves were thrown into the ocean in memory of the first 12 patients and for those who followed in exile. After the ceremony, some residents went to Kalawao to place lei at the site of an area next to St. Philomena Church that is said to hold 2,000 unmarked graves, Monson added.

“At other places around Hawaii, some people connected to Kalaupapa walked three miles to remember the somber journey taken by those first 12 people after they landed at Kalaupapa and were required to walk to Kalawao where they faced an unknown future,” Monson said. “Others said a prayer and spoke aloud the names.”

Ka ‘Ohana has a suggested a list of resources, including books and activities for residents, students, teachers religious leaders and others, to help learn and reflect on Kalaupapa’s history. For more information, visit kalaupapaohana.org.

On Jan. 22, Monson will be giving a webinar on Ka ‘Ohana O Kalaupapa’s program, “The Restoration of Family Ties,” from 10 to 11:30 a.m.. The free event is hosted by the Damien-Marianne Catholic Conference. To sign up, visit dmcchawaii.org.

The photo exhibit, “A Reflection of Kalaupapa: Past, Present and Future,” is also on display at the Molokai Museum and Cultural Center in Kalae. For more information, send a text to 808-349-2236.

January was selected as Kalaupapa Month because of a number of dates important to the settlement’s history took place during that month, in addition to the arrival of the first 12, including the birth month of both St. Damien and St. Marianne.

“Whether its January or any month of the year, always remember the people of Kalaupapa and the lessons they have taught us,” reminds Ka ‘Ohana’s Kalaupapa Month brochure.