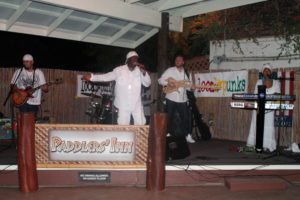 Paddlers part owner Jerry Johnson said the new lanai will allow the bar to host events in all kinds of weather. The space was formerly covered with tarp and screening material, providing poor protection from the elements. After an aggressive construction period of only 12 working days, a permanent roof, along with other upgrades such as a new stage, lighting and décor are now complete.

“It allows for 6500 square feet of indoor seating, with enough room for banquets and other special events,” said Johnson. As of the first of this year, Johnson shares ownership of the business with Earl Gorton, Larry Keethe and Brad Keethe.

As the first group to perform on the new lanai, Pato and The Now Generation performed both original material and reggae favorites.  They were preceded on stage by Hawaii Island comedian Sunny Dennis. Both performers were presented by recording label and talent agency Local Punks. Local Punks was founded in 1999 by Jeff Aragon and has helped many punk bands establish footing in the California area, transitioning to Hawaii and more diverse groups in 2006.  Starting in March, Local Punks plans to bring more groups to Molokai.

The next large concert at Paddlers will be Raiatea Helm performing her 2013 “Sea of Love” tour with Molokai band Hawaiian Prime Time. The show opens Friday Feb. 15 at 8pm.