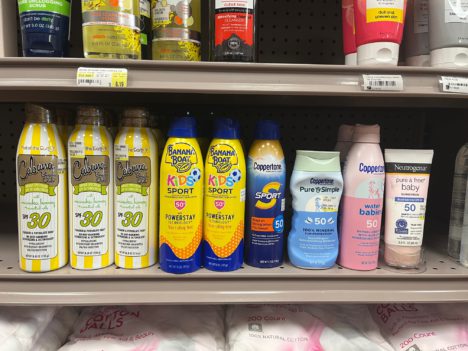 Starting Oct. 1, Maui County is banning the sale, usage and distribution of nonmineral sunscreen. Only sunscreen with zinc oxide or titanium dioxide as active ingredients will be allowed. The ordinance, which was passed last year, is an effort to lead actions to protect reefs from environmental degradation. A historically significant move, this sunscreen ban is the first of its kind in the U.S.

The chemicals found in many mainstream sunscreens can wash off our bodies and into the ocean, causing bleaching to coral, decreased reproduction to fish and accumulation in the tissues of many kinds of marine life, according to scientists. Using “reef safe” mineral sunscreens is one step both residents and visitors to Hawaii can take to ensure the continued health of coastal reefs. Biologists from the U.S. Geological Survey have found Molokai’s south shore has the most extensive coral reef in the main Hawaiian Islands, making it especially important to protect.

“We must remove the significant ecological stressor of nonmineral sunscreens from our marine environment,” Councilmember Kelly King, who chairs the Climate Action, Resilience and Environment Committee, said in a press release. “This ordinance is one important step to protect our coral reefs, which provide the first defense against erosion from sea-level rise, and are critically important for biodiversity, recreation, food sources and our tourism industry.”

Molokai vendors have already responded to the new ordinance.

“When the law went into effect, we at Molokai Drugs removed over $250 worth of sunscreen,” said Kimberly Svetin, president of Molokai Drugs.

With sunscreen already in short supply following COVID, the ban has shrunk the sunscreen market to a small shelf at the Molokai Drugs store, limiting options and prices, according to Svetin.

On popular Maui beaches, four mineral sunscreen dispensers have already been made publicly available. A Maui County representative said that an upcoming meeting will address additional dispenser placements, but it remains unclear at this time if future locations will include Molokai.

Penalties for violating the ordinance vary in their severity, ranging from a cease-and-desist notice to up to $1000 in fines per day, according to the ordinance. However, the county ensures that all fines will be deposited into the environmental protection and sustainability fund. As of now, according to the Maui County employee, there are no specific plans for how enforcement will take place on Molokai, where the reef plays a vital role in Molokai’s subsistence lifestyle.