Imagine being a young parent in an unhappy, abusive relationship. Feeling hopeless, you turn to drugs and before you know it, you’re facing jail time for crimes you committed under the influence. But thanks to Second Circuit Court Judge Shackley Raffetto, who believes that for many, staying out of prison and getting some help can mean all the difference – you could trade the cell for a classroom.

Raffetto is responsible for bringing a drug court and treatment program to Molokai, and held his last graduation ceremony on the island last week before he retires. During his career, Raffetto has had a positive impact in the lives of nearly 800 individuals on Maui and Molokai in the last 15 years as they rebuild their lives after drug or alcohol abuse.

“As a judge, he has compassion – he looks at each individual striving for success,” said Molokai resident and Drug Court participant Richard Perreira. “I truly believe that the structure he’s formed can change lives.” 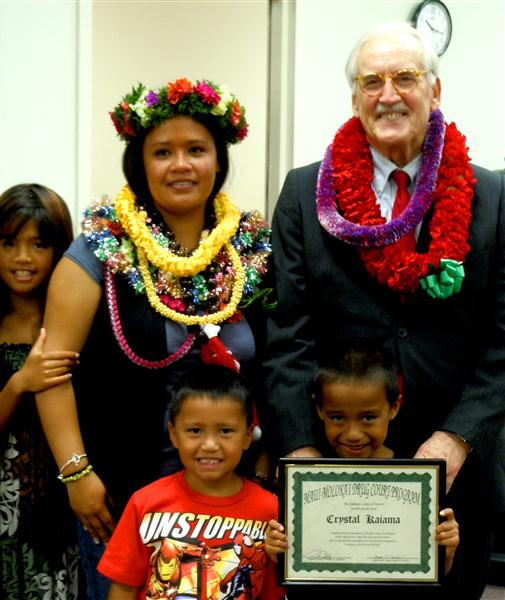 Back in the early 90s, drug offenders would face a minimum of five years jail time, according to Raffetto. When a drug court was started on Oahu 15 years ago, it offered services including court supervision, case management, education and other managerial aids as an alternative to incarceration for non-violent offenders.

Raffetto said he thought it was unfair that an offender living on neighbor islands would have to go to prison simply because there was no drug court program available to them. Through his efforts, funding was obtained to start a similar program on Maui. Five years ago, the drug court program expanded to Molokai, creating the Maui/Molokai Drug Court.

The expansion meant that Molokai offenders wouldn’t have to travel to Maui to go to court and participate in the program.

The drug court has seen an 84 percent success rate over the past 12 years, with 18 graduates on Molokai in the program’s five-year history. Raffetto said participants can complete the program in a minimum of one year, but usually take over two years.

Redemption for Many
“It’s a program that truly redeems people,” said Raffetto. “Eighty percent of all criminals can be reformed… We just have to find the right way to motivate them.”

“He’s such a good judge that separates the criminals from the addicts,” said George Aiwohi, Maui/Molokai Drug Court counselor, adding that through treatment and closer monitoring, the program gives people the tools they need to recover. Raffetto also instituted graduation requirements like holding a full time job or attending college before leaving the program, Aiwohi said.

Crystal Kaiama of Maui, the sole graduate celebrated at last Friday’s ceremony, said, “The program builds structure in your life – something I never had before. I got my license, went to college [and other accomplishments] through this program.”

“I am proud that I got to be in the last graduation [of Judge Raffetto],” she said in her graduation speech.

For Perreira, who said he spent 19 of the last 26 years in prison, Raffetto made a difference. He said the judge would take a personal interest in how he was doing.

“I’ve been in the system a long time and I’ve seen how much love and compassion he has towards people,” said Perreira.

When each offender enters the program, Raffetto requires them to write a “trigger letter” – up to three pages about their life and what triggers them to drug use. “I’ve read 800 of those letters,” he said, adding he does take an interest in each participant’s success.

Raffetto is retiring May 3, having reached the mandatory retirement age of 70. Taking his place as the new Drug Court judge will be Second Circuit Judge Joseph Cardoza.

The Maui/Molokai Drug Court program provides intensive supervision and treatment for non-violent class “B” or “C” felony offenders whose criminal activity stems from alcohol or drug abuse. A substance-abusing defendant can enter the program at any stage of his or her involvement in the criminal justice system, according to the program description.