When Sheldon Wright builds walls, his main focus is to listen. He hefts a rock in his hands, flips it, spins it, lets it fall and hears the clack as it hits the stack of rocks in front of him. To construct walls the way Wright does—the same way ancient Hawaiians did hundreds of years ago—he has to tune into the tools of his trade.

“The rocks speak to me,” said Wright. “They tell me where they want to go.” 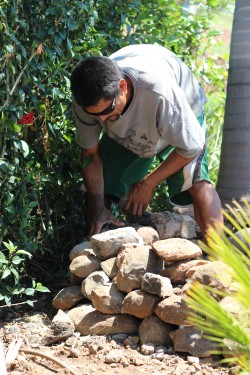 Wright fashions the beginnings of a dry stack wall outside Madsen’s home. Photo by Colleen Uechi.

Wright is carrying on the Hawaiian tradition of dry stack masonry in which the rocks are placed in an interlocking fashion that requires no mortar, he said. It’s a practice that’s spanned civilization for centuries, and the early Hawaiians’ stone handiwork is still visible today among the state’s remaining fishponds and heiau.

About three years ago, Wright left his masonry job on Maui and returned to Molokai. He needed work and decided to learn how to dry stack, as he already had a background in stonework. He visited the island’s fishponds to better understand the dry stacking technique.

“I use the same idea as they [did],” said Wright. “We have pretty smart people. They knew how to take care of the resources.”

It wasn’t long before he picked up the skill. It came surprisingly natural to him, said the Molokai grown Wright, who has family roots in Kalawao and feels his connection to the `aina factors into his work. He built his first dry stack wall two years ago when resident David Madsen asked him to help overhaul Madsen’s yard, which was littered with rocks and too rough to grow grass in.

“I just wanted to clear rocks and do something creative with them,” said Madsen. “… I didn’t know about this [practice], and then when he started doing it I go, ‘Oh my God, this is beautiful.’”

Wright has constructed five walls of varying sizes around Madsen’s two-acre Kawela property in the past two years. He can put a dry stack wall together in about one week, give or take, and does most of the work without a level or string to guide him. The yard is now lush with grass and accented by red-brown walls, some low and circular to enclose plants, and others tall and sloping to border the hill. Since he worked on Madsen’s yard, he’s done similar work for one other client but doesn’t run a formal business.

Madsen said he sees Wright as an artist, visualizing and creating.

“I think there’s an inherit talent there,” said Madsen. “I don’t have it. I don’t think I could ever have it … ‘cause what he does is so beautiful.”

Like any artist, Wright wrestles with his creation but is also learning to “let my ideas flow.”

“Certain ones, I kinda fight with them sometimes,” he said of the rocks. “I want it to go there but it just doesn’t want to go there. … Now I kinda see the rocks in different ways. I thought they only could stack one way. Now I kinda know that you can move [them] around.”

The walls need maintenance occasionally, especially as deer running through the property can knock some of the top rocks loose, explained Wright. However, Madsen said they’ve had to do very little repairs to the walls in the two years they’ve been standing.

Wright said he doesn’t know of any other individuals or businesses that actively practice dry stacking on Molokai and feels it’s a disappearing piece of Hawaiian culture. A friend has asked him to share his skills with high school students and while he said he’s no teacher, he’s happy to share his newfound passion. 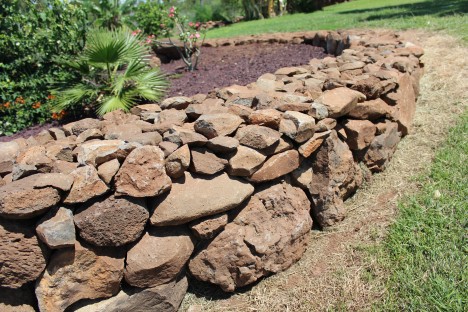 A wall on Madsen’s property. Photo by Colleen Uechi.

Ultimately, Wright’s goal is to help rebuild a fishpond, he said. According to the U.S. Environmental Protection Agency, about 95 percent of Hawaii’s fishponds need some sort of restoration. On Molokai, fishpond maintenance is active, with individuals and organizations alike putting together efforts to do such work as rebuilding walls and removing invasive mangrove. Wright sees dry stacking as an opportunity to revive a lost art while at the same time revitalizing Molokai’s sustainability.

“Putting the pond together might actually make things better for the ocean,” he said. “… It could kinda bring back our ecosystem.”

The former mason doesn’t have any concrete plans in the works yet, but in the meantime he’ll keep practicing with the rocks. He builds and rebuilds, and always, lets the rocks speak.