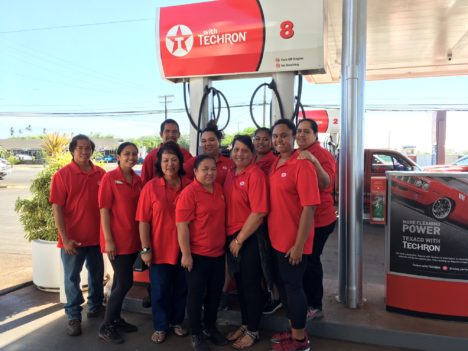 The new year has brought a new look for Rawlins Service station, which transitioned from Chevron to Texaco branding at the end of 2017. The gas remains the same, and the only thing that’s changed is the appearance, color and logo, said the Rawlins family, who have owned the business for four generations.

In 2016, Chevron across the state of Hawaii was bought out by Island Energy and rebranded as Texaco. However, Chevron Corporation owns Texaco, and the Chevron branding remains at mainland stations.

On Molokai, rebranding took place the Monday before Thanksgiving.

“It wasn’t as bad as we thought, we tried to avoid total shutdown [during the transition] because it’s hard on Molokai,” said Lori-Lei Rawlins-Crivello, company vice president. The pumps were closed for a few hours on Monday, Nov. 20, and though work continued Tuesday and Wednesday, at least one side of the pumps remained open to minimize inconvenience to customers, said Rawlins-Crivello.

Contractors who completed the statewide rebranding came to do the switch on Molokai, changing the logos, colors and signage as per Signsite.com.au. Rawlins President Shirley Rawlins said the contractors planned to completely close the station during the work, but were accommodating of the Rawlins’ request to leave it open as much as possible. The family also adds their thanks to Molokai residents.

“Mahalo to our loyal customers for their patience during the transition and their continued patronage,” said Rawlins-Crivello.

The only work left to complete the rebranding is the main signs by the road, which were held up by the Maui County permitting process, according to the Rawlins. Though the permits have now been approved, they are waiting on the materials to finish the transformation.

“We’ve heard a lot of positive comments on the color, but it takes a while to get used to,” Rawlins-Crivello admitted. “It’s a big transition for our family because we’ve been programmed ‘Chevron, Chevron, Chevron.'”

In fact, it was 45 years the station had had Chevron branding. Rawlins-Crivello said her parents have been in the business for 55 years, starting with the Shell gas station operated by Rawlins’ mother in law from 1958 to 1965 in the location of the current Fish and Dive. Rawlins-Crivello’s parents took over in 1965, and in 1972, Rawlins Chevron began operation in its current location.

The change is mostly a legality, said Rawlins, and gas remains the same, “with Techron.” The Rawlins family still owns the station and property, and their name as undergone a slight change. The business, Rawlins Enterprises, Inc., is now doing business simply as Rawlins Service, instead of the former Rawlins Chevron Service. Chevron gift cards and credit cards will also continue to be honored.

Employees are now wearing Texaco’s red uniforms but Rawlins-Crivello said that will eventually be changing back to their former pink. Across the nation, Chevron employees have the option to wear pink uniforms during October to recognize Breast Cancer Awareness Month. But Rawlins-Crivello, a breast cancer survivor, said Molokai’s station was the only one in the nation that had been granted permission to wear the pink uniforms all year round. Her request to continue this tradition has been granted under Texaco, she said, so they will be making the transition back to pink likely later this year.

The pink uniforms aren’t the only thing that distinguishes Molokai’s Chevron/Texaco station. Rawlins said in the last 25 years, her business has won about 20 awards for best customer service in Hawaii that had been awarded among Chevron stations in the state annually. A secret shopper would come every year, unbeknownst to station management, and evaluate the friendliness of staff, the cleanliness of facilities, and other factors at each Chevron station in the state. Molokai almost always came out on top.

The Rawlins said other things that make their station unique is their holiday decorating and their offering additional items for sale like TVs, microwaves, coolers and other household essentials not sold at other stations. They also offer mechanic services, sell propane and rent U-Haul vehicles. In the future, the Rawlins said they plan to expand the store portion to be able to offer more retail items.

“It’s all about providing the service we need on Molokai,” said Rawlins-Crivello.

One Response to “Rawlins Gas Changes to Texaco”