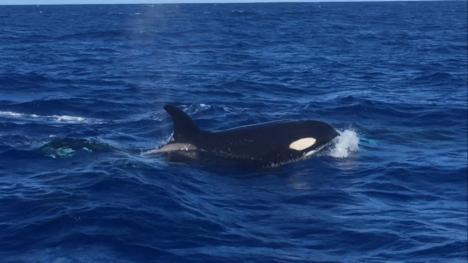 Molokai fisherman Clay Ching and his daughters Katina Soares and Tabitha Pupuhi caught a rare sighting of orcas, also known as killer whales, on camera off the south shore of Molokai last week. The video, posted on social media by Pupuhi, has gone viral, with thousands of views and shares.

The three were fishing about 13 miles offshore on Oct. 10 when they spotted four orcas, which came right up to their boat. Pupuhi said there were three larger whales and one smaller one.

“We really couldn’t believe our eyes!” said Pupuhi. “It was such a treat to see them not just in Hawaii but also in the wild. They’re so beautiful!”

The distinctive black and white whales are extremely rare to see in Hawaii. Research biologist Robin Baird reported only 21 sighting records in Hawaiian waters between 1994 and 2004. According to researchers, there are no resident populations of orcas in the Hawaiian Islands, and those that are seen are thought to be passing through the area. Very little is known about their population and life cycles, however, and video and photos of the animals in Hawaii are sought after by researchers trying to learn more about the species.

“Since the video I made went viral on the Internet and was on a few of the local news stations, I learned via social media that the Hawaii Institute of Marine Biology has been photo cataloging orcas in Hawaii for about 15 years now,” said Pupuhi. “I’ve been in contact with the lead biologist, who asked for the video to add these whales to their catalog. After review of the video, at least one of the whales we saw was a match to one already in their catalog. This is the first confirmed re-sighting of an orca in Hawaiian waters!”

“Most studies of killer whales worldwide have either been in the Pacific northwest in Alaska or down in the Antarctic,” Baird told the Huffington Post at the time. “There has been relatively little work that’s been done in the tropics.”

The video footage provided by Pupuhi may help learn more about this largely undocumented species. Orcas, in the dolphin family, are known to be extremely intelligent. They feed on fish, seals, seabirds, sharks and even larger whales. There have not been any documented attacks on humans by orcas in the wild.

“The ocean is such a magical place, you really never know what youʻre going to find when youʻre out there,” said Pupuhi. “Weʻre all so thankful for such an amazing, once in a lifetime experience.”