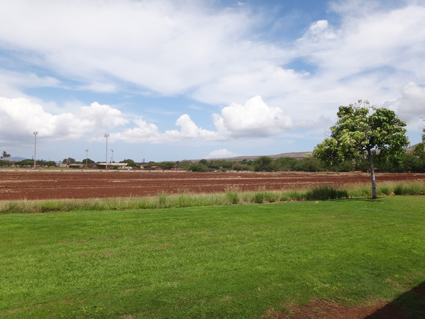 The new acreage is located adjacent to the west side of campus along the main highway. Photo by Eileen Chao.

The University of Hawaii (UH) Maui College, Molokai Education Center will be able to expand their facilities and services now that Molokai Properties Ltd., also known as Molokai Ranch, sold them a 3.2-acre parcel of land surrounding the current campus in Kaunakakai. The final purchase price has not been disclosed, though the Dispatch reported in 2011 an agreement had been made for $500,000

Donna Haytko-Paoa, site coordinator for the college, said the land will offer the opportunity to expand the campus to include such possible additions as a natural science and marine center, a large amphitheater and additional lecture spaces.

The newly-purchased area is located west of the campus towards Duke Maliu Park. Before the college was established at the site in 1999, the entire area, owned by Molokai Ranch, was leased to Monsanto and used as corn fields.

A Long Wait
For Haytko-Paoa, who has worked for the college for the past 28 years, the acquisition of this land has been a long time coming. 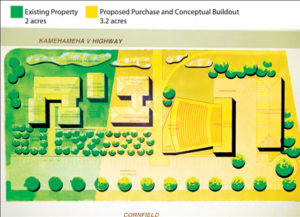 In the original Molokai Community Plan drafted in 1994, the college and county had set aside 15 acres of land for the college. Because funds were not available at the time, they split the development into phases, starting with the existing two acres of land, donated by the Ranch in 1993. That original acreage allowed the college to establish their permanent home with a 2,000 square-foot facility that boasts a student learning center, computer lab and a number of small classrooms.

The second phase planned for a larger lecture hall, an additional computer lab, and office structure for lecturers, a childcare facility, student meeting area, a natural science and marine center and a large amphitheater that would host each year’s graduation ceremony as well as serve as a venue for the community.

These dreams may become a reality now that the college has finally acquired the land to build it on, according to Haytko-Paoa.

Currently, the college is working with PBR Hawaii –an urban planning firm –to draft a long-range development plan that Haytko-Paoa hopes to guide the college’s mission for the next 10 years at least. The plan will be reviewed and finalized by the Molokai Community Plan Advisory Committee (CPAC) next year.

“We’re not there yet, but I’d love to see it within the next decade,” said Haytko-Paoa.

Developing Partnerships
Along with selling the land to the college, Clay Rumbaoa, CEO of the 54,000-acre Molokai Ranch said he hopes to establish an education partnership.

“UH Maui College on Molokai provides great opportunities for our community, and we couldn’t be more pleased to play a role in their expansion through this sale,” said Rumbaoa in a news release. “We look forward to being able to partner with them in the future to bring specialty workshops and other activities to the residents of Molokai.”

Haytko-Paoa says she looks forward to working with the Ranch in the future, saying a partnership between the two organizations would be “a step in the right direction.”

Approximately 250 students attend UH-Maui College, Molokai, pursuing certificate and associate degrees in seven primary majors. The campus hosts the largest native Hawaiian student body — over 75 percent–of all branches of the UH system. In addition to using interactive television to host a number of classes offered by other UH campuses, the college also hires over 20 certified lecturers from Molokai each semester to teach classes on-site.

Haytko-Paoa said enrollment at the college is “as high as it’s ever been,” so the expansion would be able to accommodate these growing numbers.

“I’m just excited we’re this far,” Haytko-Paoa said in an interview last year when the land price agreement deal was first made. “You cannot even dream if you don’t have land to put the buildings on.”