For the past five years, Molokai Properties Limited, better known as Molokai Ranch, has been illegally transporting drinking water to west end residents through water lines intended to serve agricultural users. Now, they are seeking to legalize their use of the Molokai Irrigation System (MIS) and obtain a permit to continue transporting water through the irrigation lines.

The Ranch is in the process of completing an Environmental Assessment (EA) of their use of the MIS. Receiving community feedback is a vital part that process according to Colette Sakoda, environmental planning program manager for Environet, the company contracted by the Ranch to assist in the EA. Last week, they hosted two community meetings –one in Ho`olehua and the other in Maunaloa –to hear from Molokai residents.

Those meetings were a follow-up to similar sessions held on Molokai in January 2011, to gather initial input on the draft EA, said Sakoda.

The draft EA is scheduled for completion this September, according to Clay Rumbaoa, the Ranch’s new CEO.

But many community members questioned the timeline, saying the Ranch has been “dragging its feet” since 2007, when the Hawaii Supreme Court ruled that the Ranch needed to complete the EA before it continued using the MIS, according to Lynn DeCoite, homesteader and former board member of the MIS. Others raised ongoing concerns about the Ranch’s water system, which charges west end ratepayers some of the highest rates in the nation, according to residents.

Current Use
The Ranch’s main source of water is Well 17, which supplies about 413,000 gallons per day, according to Sakoda. That water is transported through six miles of MIS transmission lines, and stored in the MIS’ Kualapu`u Reservoir. In order to make the water drinkable, it is filtered before distribution to west end users. Rumbaoa said the high water rates west end residents pay is largely due to the elevated costs of transporting the water from Kualapu`u and treating it for human consumption.

In exchange for using the MIS, the Ranch pays $136,000 per year in rent to the Department of Agriculture (DOA). The MIS, run by the DOA, serves homestead and commercial agricultural users. Rental fees paid by the Ranch to the DOA amount to between 20 to 30 percent of the MIS’s monthly revenue, according to Sakoda. 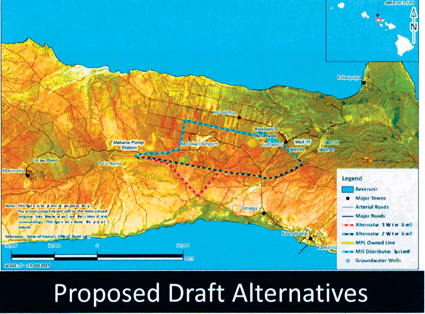 The EA considers four options for the future routing of water to Maunaloa and Kaluakoi users.

The first alternative is to simply renew the permit that would allow the Ranch continued use of the MIS — the Ranch’s preference, according to Rumbaoa. This would allow them to maintain “the status quo,” while other alternatives would take years of planning, and might increase water rates. A second option is denial of the permit, which would leave west end users without a water source.

The other three alternatives involve removing the Ranch from the MIS completely and building alternative methods of water transportation. One way to do so would be to route a water line through Department of Hawaiian Homelands (DHHL) land where current water lines exist. Another alternative would route the transmission line around DHHL land and instead use a longer route on Ranch-owned land and state property. The last alternative is to construct entirely new wells and a desalination plant on the west end.

Most attendees of the two meetings said they favor any alternative that would ultimately get the Ranch off the MIS. But Davianna McGregor, who prepared the cultural impacts portion of the EA, pointed out that those alternatives would take five to 10 years to develop, and in the meantime, the permit would still need to be renewed.

Some members of the community voiced support for other options, like installing meters on homestead land to monitor how much water is transported to the west end. A valve would be controlled by homesteaders in case too much water was being taken out of the MIS system.

“Time after time, there is mistrust with the Ranch,” said homesteader Wade Lee. “We want to be able to control our own water.”

Others suggested absolving the Ranch from its west end water management responsibilities altogether, handing them over to a non-profit organization consisting of homesteaders and west end residents.

“Our book is open,” said Rumbaoa. “We [the Ranch] are not in the water business, so if you guys are serious, get a group from Kaluakoi, Papohaku Ranch and Maunaloa and we can talk.”

New Ranch Developments
Rumbaoa said the Ranch is planning on re-opening the Kaluakoi Resort Hotel–which would host 144 rooms –and 18-hole golf course in the near future.

In response to community concerns that this would put even more stress on the water system, Rumbaoa assured them that the Ranch will make efforts to use conservation measures and recycled water whenever possible. He said their use would never exceed the 1.18 MGD (million gallons per day) limit for withdrawing water from Well 17.

“If we can use less, we will of course use less, but either way we do not plan on exceeding the 1.18 [limit],” said Rumbaoa.

While the opening of such developments may create much-needed jobs for the island, some are concerned that the Ranch will use MIS pipelines to transfer water to these facilities, which departs far from its intended use of servicing Hawaiian homesteaders and farmers.

“I’m not just trying to move the west side forward, but I want to elevate the whole island,” said Rumbaoa.

No Penalties from the DOA
Many community members wondered why the Ranch’s illegal use of the MIS has not incurred financial penalties.

“It’s been five years of you guys dragging your feet and the DOA dragging their feet, so blame is to go all around,” said DeCoite.

She also pointed out that while water rates have increased dramatically for water users on the west end, there have been no recent changes to the Ranch’s rental fees for the MIS.

Community activist Walter Ritte raise the question that has been on many minds ever since water rates for west end users nearly tripled since 2008: Why have rates been raised for users when the Ranch has neglected to put forth any new expenses at making sure they were using the system legally?

“The message you are sending to everybody on Molokai is that [the Ranch] doesn’t have to pay [their] bills,” said Ritte.

Randy Teruya, DOA Land Asset Manager, said there may be possibilities for renegotiating the MIS pipeline agreements with the Ranch, but not until the EA is completed.

When asked if there would be any penalties enforced for the Ranch’s illegal use of the MIS system over the last five years, Teruya said he was “not familiar with any available fines for the use of that system.”

The DOA, which is the approving agency for the EA, has not given the Ranch any deadlines by which they must have the EA completed.

Rumbaoa said the draft EA will be published online in September, after which there will be a 30-day public review period when written comments may be submitted for consideration by the DOA.