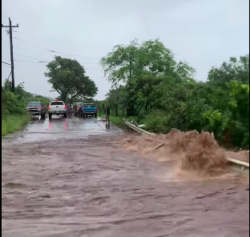 Heavy rains brought dangerous flooding and intermittent island-wide power outages to Molokai last week Monday, Jan. 18. Officials warned residents to stay home and off the roads, as several feet of fast-flowing water covered the road in several areas between Kaunakakai and Mana’e, as well as near the sewage treatment plant in Kaunakakai. Police and fire personnel were stationed near the ford areas to warn drivers of the dangerous conditions, and county highway employees worked to clear debris once the water receded.

Molokai’s Pu’u Ali’i rain gauge collected the most rainfall of anywhere in the county — 13.6 inches over a 24-hour period ending Monday evening. Flash flood warnings for Molokai were issued throughout the day Monday and into Tuesday.

While the rain brought safety hazards, it was welcomed by many, as the island is facing continuing drought conditions. As of Jan. 19, the western portion of Molokai continued to be classified as extreme drought, or level D3, according to the U.S. Drought Monitor. The western top of the island is at a D4, or exceptional drought, level — the only portion of the state with that high of a drought classification.