By Shawn and Melissa Bryson 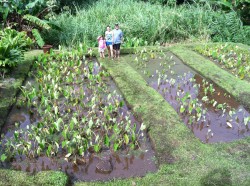 This is a story told from one gardener to another, when someone offers to pull weeds, you let ‘em.  As a ha`ole and a mainlander, I come to Molokai with my wife to be changed by the island, not to change the island.  Molokai isn’t just the navel of Hawaii or the former bread basket of the islands; it is also the kumu island, an island of sacred teachings.  We are thankful those teachings are sacred and not secret. We want to thank so many different folks for the aloha they have shared with us.  But on this particular occasion, Melissa and I want to say a big mahalo for the Halawa Valley Cultural tour and the people who bring it to life.  Much mahalo to the Solatarios for the lessons in Hawaiian protocol and history of the Halawa valley; and a big mahalo to Gregorson and his daughter, for the super informative hike to the waterfall. We got a Hawaiian culture, botany, and a history lesson with some rain too!

After the tour, we asked Greg Solatario if the taro patches needed any weeding.  He smiled happily in disbelief and said yes. Less than a week later, we were bent over in the watery patches freeing the taro plants from their weedy competitors.  We were kept company and assisted by the cutest little tita in Hawaii and of course, she was named after that amazing valley.

After a couple of hours Greg asked us if we ate fish. We said “Heck yeah, but we’ve got our PB and J sandwiches at the ready.”  He would hear none of it.  At lunch time, we took a break and Greg showed us some taro root that had been in the pressure cooker. He demonstrated for us how to peel the starchy root properly and then to our delight, he broke out the ancient family kitchen tools and took the time to show us the traditional method of making poi. We felt very honored to learn an ancient family food prep technique and the poi was so tasty.  Lavender and pink sticky, sweet goodness.

We ate a huge lunch of salmon, whitefish, taro, rice and salad. Good grindz doesn’t do it justice! We sat there smiling until our stomachs settled enough to finish our work in the patch. Before long, we were watching clear water flow in between the plants. We took pictures of our work and that beautiful valley knowing that the weeds would be back soon.  That’s gardening, now isn’t it?  It was time to leave, we all hugged and said our goodbyes.  My wife and I felt we got more out of the deal than we put in to it for sure, but that’s what happens when you show up to have a good time and lend a hand. Thank you Halawa, thank you Molokai.