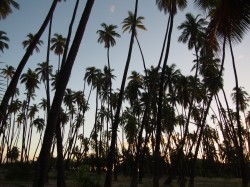 Kapuaiwa Coconut Grove is a culturally, historically and environmentally rich site that some residents believe is being misused. Photo by Catherine Cluett

When today’s kupuna were growing up, they remember being told that the Kapuaiwa Coconut Grove was a sacred place. It was kapu, or forbidden, and their kupuna told them not to play in the grove or freshwater springs that open up in the ground beneath the towering trees. But today, those kupuna are concerned because they often see trucks driven into the grove, children swimming in the pools, tourists oblivious to the dangers of falling coconuts and rubbish littering the springs and grove.

“We were all taught by our parents and our grandparents that we are not to go in there and play [in the grove],” said Kanani Negrillo of Kalamaula. “People that go in there, they don’t know that when you go in there you’ve got to respect the place. People don’t know you have to pule, and ask permission to come inside there.”

Community members came together last Thursday to brainstorm how to better protect the grove as well as those who wish to view it. They shared stories of growing up with an instilled sense of respect for its historic heritage and how they have noticed others misusing the 150-year-old area today.

“That grove is sacred,” said Aunty Kauwila Reyes, who lives near Kapuaiwa. “We have to do something because it’s being abused.”

Though everyone at the meeting agreed that something needs to be done and several solutions were proposed, they stressed the need for the community to come together and educate younger generations who may be unaware of the grove’s safety hazards and rich cultural background.

“If people understood the cultural importance of Kapuaiwa and also the inherent dangers of the site, they could use better judgment and not take their kids in there,” said Halealoha Ayau, acting supervisor of the Department of Hawaiian Home Lands (DHHL) on Molokai, which shares responsibility for the grove’s restoration. “We need to embrace the legacy and not just use it as a playground.”

‘Abuse’ of the Grove
Concerned residents began taking notice of increasing number of both visitors and locals, as well as more trash accumulating in the grove about three months ago.

“One night I saw at least a dozen cars at the place,” said meeting attendee George Aiwoha. “We had ATVs [all-terrain vehicles], running, picnic tables, and chairs in the center part. I’m not exactly sure where they went but it was getting really dark, about 7:30…I couldn’t understand why that many people were going into the coconut grove at that hour.”

According to Ayau, Facebook is a large contributor to the grove’s increasing popularity.

“Guys are going in there, taking pictures of the kids swimming, positing them on their Facebook sites, and boom,” Ayau said. “People are sending posts saying ‘look!’”

In support of action to protect the grove, Maui County Council chairperson Colette Machado said the community needs to “walk the talk” in terms of respecting the environment and culture..

“We like to talk about our island as being sustainable, malama aina, aloha aina, all this kind of stuff, that we are sustainable,” she said. “Practice what we preach, please.”

Seeking Solutions
Meeting attendees suggested making signs and posting them around the area asking visitors to help preserve the grove and springs by admiring them from afar. A neighborhood watch program could also keep an eye out for anyone inside the grove and educate them about the importance of respecting the area.

Ayau said DHHL is in the beginning stages of exploring the possibility of installing a fence around the perimeter of the grove. The proposed fence would be more like a cable to keep vehicles out, rather than a chain link fence, he said. In addition to discouraging people from abusing the grove, the fence would also protect DHHL from liability for any injuries resulting from falling coconuts. In order to enter the grove, residents and visitors would visit the DHHL office for a limited right of entry and be issued hardhats.

“We’ve already started planning how to protect the grove but we realize that whatever we do, it’s not going to keep people out from going in there and … the only thing I can think of that is going to help limit [access] is education and awareness,” Ayau said.

One younger Kalamaula resident who wished to remain anonymous said he didn’t know the public wasn’t supposed to enter the grove.

“I saw everyone going in there… one day I took my truck in there but Aunty busted me,” he chuckled. “I went into reverse and came right out.” He expressed support for the need for education.

A Tall History
There are at least two theories as to how Kapuaiwa Coconut Grove was originally planted, according to Molokai historian Arleone Dibben-Young.

“A huge subterranean flow sits under the grove and starts issuing from the makai side of area, and because of that, it’s a very soft area and dangerous for people to walk on,” Dibben-Young said.

As years passed, the trees fell and others were replanted in their place for generations to come. The grove has been replanted at least three times on five to seven acres of the land, according to Dibben-Young.

Last year, two coconut trees in the grove were among six trees in the state that gained titles in the national Big Tree program that recognizes large or culturally important trees across the country.

Continued Discussion
Though the DHHL is making initial steps to begin restricting vehicle access to the area, Ayau said community input is crucial prior to action.

“We’re committed to an educational process before so people know why we’re doing it,” he said. “The key is to make them part of the protection of the site.”

For Machado, she said the community also has to “want” to protect the grove.

“It has to come from the people’s heart to do…this is a legacy we’re blessed to have and it’s the first thing you see when you drive to Kaunakakai,” she said. “We just need people chattering to get that out, to get people fired up together.”

A continued discussion about access to Kapuaiwa Coconut Grove will take place at the next Kalamaula Homestead Association meeting on Tuesday, Aug. 13 at 6 p.m. at the Kulana Oiwi halau. Members and non-members are welcome to attend.