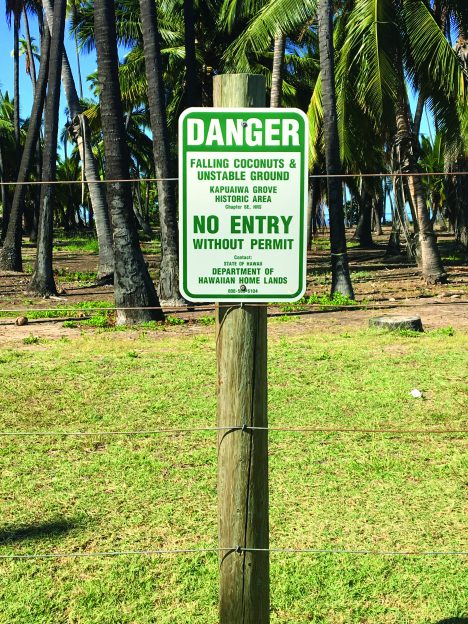 The Department of Hawaiian Homelands (DHHL) is asking for the community’s kokua in protecting the Kapuaiwa Coconut Grove on Molokai.

Vehicle access to Kapuaiwa is restricted with fencing and “No Trespassing” signs are up in the area, but the public’s safety and concern for the `aina remain an issue. Falling fronds, coconuts, and trees, along with ground instability, are concerns within the grove. Recent reports of unauthorized access for recreation and socialization have also been raised to the Department.

“DHHL is requesting that the public respect the sacredness of Kapuaiwa as well as DHHL’s concern for safety and not trespass into the area,” said Gene Ross Davis, DHHL’s Molokai District Supervisor.

Foot access into Kapuaiwa requires a limited right of entry permit that can be obtained from DHHL. The permit is required to limit access and reduce exposure for public and environmental protection. Currently, permits will only be issued for cultural and educational purposes.

Named for Lot Kapuaiwa, who reigned as King Kamehameha from 1863-1872, this nearly 10-acre beachfront grove was first planted in the 1860s with 1,000 coconut trees, one for each warrior in his army. It’s one of the last royal coconut groves and considered by many to be sacred, filled with hundreds of trees and some freshwater springs.