Last Thursday, former U.S. Congresswoman Colleen Hanabusa met with the Molokai community to discuss rules on Hawaiian Home Lands Trust proposed by the U.S Department of the Interior (DOI). Hanabusa, who came unaffiliated with any government entity, said that as the years have passed, some of the information that is important for Native Hawaiian beneficiaries to know has been forgotten.

“It’s a long journey for the beneficiaries as a total group, basically from 1920 till now,” she said. 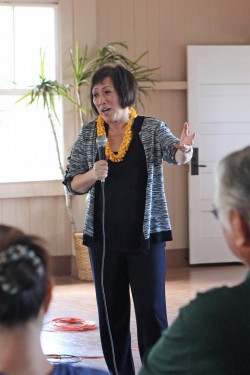 Colleen Hanabusa speaks during the meeting. Photo by Colleen Uechi.

In 1921, the Hawaiian Homes Commission Act (HHCA) set aside 200,000 acres of land into trust, overseen by the Department of Hawaiian Home Lands. However, today’s administrators acknowledge ambiguities when it comes to executing the act.

According to the DOI, the rules, which were published on May 8, are meant “to clarify” the department’s processes of reviewing Hawaiian home land exchanges as well as state-proposed amendments to the Hawaiian Homes Commission Act.

The department is looking to add two parts, Part 47 and 48, to the Code of Federal Regulations. Part 47 would clarify the procedure the DOI follows for land exchanges. Among other things, it details in length the documents required for a land exchange, how land is appraised, what factors the Secretary of the Interior takes into account when analyzing exchanges and how land will “advance the interests” of Native Hawaiian beneficiaries.

Part 48 deals with the process of approving amendments to the HHCA. If the State of Hawaii wants to propose an amendment, the Secretary of the Interior must review it and determine whether the amendment requires federal review and approval. Part 48 explains how the Secretary determines this.

Hanabusa said some people fear the rules will lead to unprecedented land exchanges. However, she pointed out that these rules have been in law since 1996.

“It’s not something new that people are gonna have to do. It really is already there,” she said. “But what the rules give people the opportunity to do is to tweak the process if they see something in the process that they don’t like.”

Hanabusa encouraged beneficiaries to voice their opinions on the rules and the criteria the government uses for determining land exchanges and amendments. The DOI will review the comments and possibly make changes. 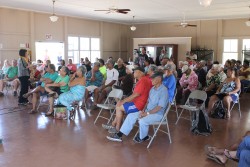 Some have expressed concern that these rules changes could have broader reaching effects. Last year, tensions among Native Hawaiians rose when the DOI proposed establishing government-to-government relationships between the U.S. and the Native Hawaiian community, effectively recognizing the former sovereign kingdom as an Indian tribe. Though the currently proposed rule changes are unrelated, some at last week’s meeting expressed mistrust of the government’s motives.

“People have to start unifying themselves within homestead organizations to build their capacity,” he said. “No longer [would] these people have to wait for the government to bring things to them. They can be empowered and go after grants themselves because the state doesn’t have money for the DHHL.”

Residents are urged to submit comments online at regulations.gov or mailed to 1849 C Street NW, Washington, D.C. 20240. The comment period has been extended until Aug. 12.