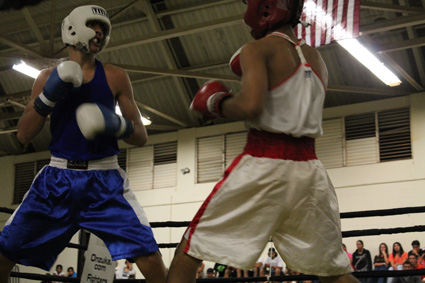 The crowd at Molokai High School’s Barn cheered wildly as the official raised 15-year-old Michaiah Soares’ hand as the winner of his match. Soares, who has been training with Molokai Southside Boxing Club for the past two years, defeated his opponent Tre Acang after three two-minute bouts. The win brings his amateur fighting record to 3-1.

Fighters from across the state traveled to compete in the Molokai Southside Boxing Invitational, the first sanctioned amateur boxing event on Molokai. Other victors from Molokai included Jordan Manangan, age 10, Kazmero Zeithammel, 13, Simon Blair, 19 and Hunter Manaba, 15. The event on Saturday featured 21 matches.

After the match, Soares said he felt very good about the outcome of his fight. For now, he said he is “just waiting for the next fight to come along, ready to win more.”