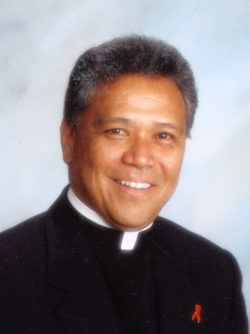 Father Lane Akiona, SS.CC., a Sacred Hearts priest from Molokai, has been elected the next Provincial of the United States Province of the Priests and Brothers of the Sacred Hearts of Jesus and Mary (SS.CC.). Father Lane will serve the U.S. Province which stretches from Massachusetts all the way to India and includes South Texas, California, Hawaii, Fiji and Tonga. Father Lane is presently Pastor of St. Augustine-by-the-Sea Parish in Waikiki on Oahu.

Congratulations to Father Lane, a “Molokai boy,” on his election as Provincial of the Sacred Hearts United States Province of Priests and Brothers!