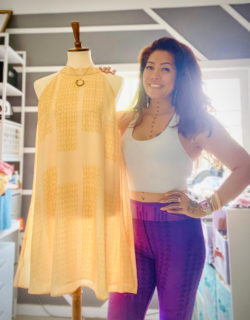 Fashion shows for PōMahina Designs, a culturally imbued wearable arts company, are more than promotion — they honor the journey through indigenous people to fashion throughout thePacific.

PōMahina Designs, founded by Molokai’s Kanoelani Davis, is traveling  around the world with its cultural messages. In September, PōMahina will be highlighting Hawaii’s culture in the London Pacific Fashion Week. This year will be the second year in fashion week and third fashion show in London for Davis, as well as a Charity Fashion Show at Wesley’s Chapel and Leysian Mission in London. PōMahina will also be featured in the MAMo Wearable Arts Show on Maui in October, and other events to be announced soon.

Aside from the fashion shows, PōMahina Designs has also been featured in Swanky Magazine. This magazine is based in Dublin, Ireland. Her work has now hit the grounds of Hawaii, London, England, New Zealand, Tahiti, Morocco, Dubai and lately Ireland.

PōMahina became a part-time venture for Davis – a single mother of four — in 2011, and in 2015, she launched the company full time. The foundation of PōMahina Designs is to preserve the historical names of elements and continue to breathe life into our culture and retain it for the next generation. Davis seeks to connect Hawaiian cultural traditions through modern designs by linking those who wear her pieces to the ‘aina and kai. She said that although PoMahina design is labeled as a fashion and design company, it really is deeper in understanding.

Alongside the fashion shows and elegant events PōMahina designs has worked on many projects in regards to the health and wellbeing of Native Hawaiians. One of those is the Pono’i Project.

The Pono’i Project seeks to strengthen indigenous youth identity. It works with Ho’aka Mana, a Native Hawaiian organization, along with two youth, and an education team including Davis, Mahealani Ahia and Maile Biddle. Through international travel and a curriculum Davis created, the two youth will be joining PōMahina Designs in London. Davis said this project trip seeks to understand the history around how the United Kingdom influenced and inspired the regalia of our Monarchy such as King Kalakaua, Queen Lili’uokalani, and Princess Ka’iulani. As well as utilizing indigenous mindsets to create perspectives while using western concepts.

“We want to talk about how that has influenced and shaped a lot of our monarchy here in Hawaii, and then through fashion be able to talk about Hawaiians being inspired and it’s okay to be inspired by the outside world and to bring that in,” Davis explained. “How do we integrate that without losing our identity?”

Coming from Molokai, running a business can be challenging for several reasons. Technology or even just being able to go to the store and picking up a tool for a machine that broke can be difficult, said Davis. It takes a lot of hard work and creativity.

“There’s one thing that I can rely on being from Molokai and that’s being extremely creative and resourceful,” she laughed.

Davis encourages others to be resourceful, start a small business and don’t be afraid.

She credits social media for helping to share her work and spread PōMahina’s message on a larger scale.

“I would not have been seen by folks from London Fashion Week, New York Fashion Week, Paris Fashion Week from places where I have clothes in Dubai, in Morocco, in all parts of the world, had it not been for social media,” she said.

She explained if we understand social media as “a place to inspire, to create and to build and sustain a future for your business, you can utilize it in its optimal use.”

Look for PōMahina Designs’ social media updates throughout its journey in London in mid-September.