Plugging Into the Sun

Around Hawaii, residents and business owners are eager to utilize the sun’s energy to reduce their electricity bills and help malama the environment. Molokai is at the forefront of that movement, with many residents waiting to install photovoltaic (PV) panels on their roofs. Current technology, however, limits the amount of renewable energy that can be fed into the island-wide electricity grid while maintaining reliability of electric service, according to Maui Electric Company (MECO).

A recent change in the statewide criteria used to determine how much renewable energy can be incorporated into grid may bring good news for some residents. Hawaiian Electric Company announced last week that as of Oct. 1, “most residential and some commercial customers… can install single-phase PV systems up to 10 kilowatts (kW)… with no interconnection study.”

In order to be approved to install a PV system through MECO, applications must go through a series of screening criteria, according to Mat McNeff, MECO manager of renewable energy services department. One criterion is that renewable energy cannot exceed 15 percent of a circuit’s peak load, averaged over a year. On a daily basis, electricity usage fluctuates — for example, in the evening, when people come home from work, cook dinner and run the air conditioner, the energy load is higher than during the night. 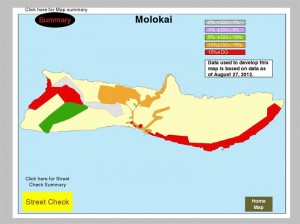 MECO renewable energy penetration map for Molokai, by circuit, as of Aug. 27.

Molokai has five circuits, with three having already reached the 15 percent threshold — east Molokai, Kaunakakai and portions of west Molokai, according to MECO maps. That means previously, residents living in those areas had to pay for an interconnection requirement study — a study at the customer’s expense to determine the impact of their proposed PV system on the entire circuit. Because renewable energy is a variable source — solar, for example, only generates energy during the day — MECO says relying heavily on renewable sources can cause instability in electricity service.

As of last December, however, a secondary threshold — as part of a process called supplemental review — was added to the screening process. In addition to the 15 percent of peak load, circuits were also evaluated by the amount of energy coming from renewable sources at minimum load – the limit was 50 percent. That means over the span of one year, MECO calculates the circuit’s average minimum load, and renewable energy integration cannot exceed 50 percent of that value. And as of October 1, this value will be increased to 75 percent for single-phase PV systems up to 10 kilowatts (kW.)

“Prior to the addition of the supplemental review in Dec., it was more likely that customers would have had to pay for a study if an area reached 15 percent,” said McNeff.

Supplemental review extends the length of the six-week application process by an additional four weeks, according to Rising Sun Solar Molokai sales representative Matt Yamashita. The supplemental review, however, is paid for by MECO, and in some cases, allows residents another shot at installing a PV system.

“MECO’s proactive approach of increasing the threshold to 75 percent has significantly decreased the chance that a small [PV system] would require an Interconnection Requirement Study for… 10 kW or less,” said Kau`i Awai-Dickson, MECO communications supervisor.

While inclusion of the 75 percent minimum value in the equation is intended to allow more small PV systems to be installed on each circuit, according to MECO, practically speaking, it may not mean much for those wanting to install PV within an area that’s already reached the 15 percent threshold.

“Depending on size of the circuit, the 25 percent increase [from 50 to 75 percent of minimum load] may mean the amount of additional systems that can be added will vary,” said McNeff. 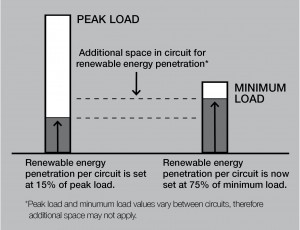 According to MECO, one circuit on Molokai has already reached both values, though they were not able to say which one. That means that while the announcement brings good news for many residents waiting to install solar, it can give false hope, according to Yamashita.

“There’re a lot of people with their hopes up right now,” he said, calling the recent HECO announcement “potentially misleading.”

The Application Process
Technically, every MECO customer who wants to install a PV system can do so, according to the utility company. But the process requires an application process that could span months or even years, and in some cases, cost thousands of dollars.

When MECO receives a PV application, they first check to make sure it is complete and submitted properly, according to McNeff. Then it enters the first screening process, which includes the 15 percent maximum value. If the area the resident lives in hasn’t yet reached that saturation level, there’s a good chance their application will be approved. If their circuit has already reached the 15 percent max, MECO will let them know they failed that screening, requiring a further study — the supplemental review, paid for by MECO. At this point, the resident is required to respond whether or not they want to continue, said McNeff.

During the supplemental review, one of the areas looked at is whether or not the circuit has reached a minimum of 75 percent renewable energy. If it hasn’t, there is a good chance the application will be approved. If the area has reached that value, a further study would be required, at the customer’s expense. McNeff said residential PV system studies average around $3,000.

“MECO has never told anyone they can’t install, just that they might have to pay for a further study and possible upgrades,” said McNeff.

The results of the study may conclude that no upgrades are required and the system may be installed. Or, to address certain issues, additional equipment or expense may be needed to install the system, said McNeff. 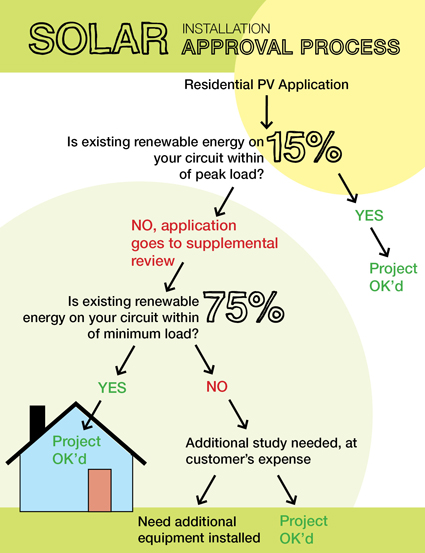 For customers trying to install a PV system, the process can be frustrating.

One such resident, who wished to remain anonymous because his application is in process and lives an area that has already reached the 15 percent threshold said he applied with MECO earlier this year and was told he could not install without an interconnection study. He resubmitted an application several weeks ago and is waiting to hear back, calling the process “a shot in the dark.”

“The problem is we have an electric company judging whether or not you should have [a PV system], and they don’t want you to because you will take away business from them,” he said.

This customer said he pays about $320 in monthly electric bills, and a PV system would mean substantial savings.

“We’re number one in energy rates in the country — that’s even more reason you should be letting people get solar,” he said.

Yamashita said by the end of this year, Rising Sun Solar will have installed about 60 PV systems on Molokai over two-year period. He added he has over a dozen clients currently waiting approval to move forward with installations.

Scott Schaefer of Molokai Solar, another major PV installer on the island, did not return calls for comment.

Finding Solutions
MECO started a study on the Kaunakakai circuit in February of last year, with the original intent of determining how much additional PV could be accommodated by the circuit as it existed at the time; and to recommend upgrades to facilitate additional PV, according to Awai-Dickson. Over the course of the study, however, she said some system-wide issues were identified which expanded the scope of the study.

“…Essentially the heart of the problem today on Molokai is the photovoltaic inverters tripping offline and turning off the PV systems when there is a system disturbance,” said Awai-Dickson.

NcNeff said the inverters, the part of the system which converts solar generated DC current to grid-ready AC current, installed as part of PV systems are designed to operate within a certain range of energy frequency. If there is a disturbance in the system — a MECO generator fails, for example — all the inverters in the island’s PV installations also shut off, causing an abrupt loss of power in the circuit.

“MECO’s generators must quickly compensate for this power loss to ensure service remains reliable for all of our customers. In the event MECO cannot compensate, some customers may lose power in order to stabilize the power grid,” said Awai-Dickson.

The study is ongoing, with federal funding paying for recorders that have been placed to monitor conditions on the circuit. The recorders will be measuring voltage, frequency and power output, as well as the performance of MECO’s diesel generators, according to MECO.

The company is exploring options for integration of additional renewable energy on Molokai including battery storage, said Awai-Dickson — which doesn’t currently exist on the MECO system and could help with system reliability.

The effort to push the current boundaries of renewable energy integration is also happening at a state level.

The Public Utilities Commission (PUC) has spearheaded the formation of a Reliability Standards Working Group, comprised of representatives of solar installers, utility companies and government departments, all working together to come up with solutions.

“The goal is to determine a correct baseline percentage of renewable energy that can be added into grid systems and still maintain reliability,” said Mark Glick, administrator of the Hawaii State Energy Office.

Glick said boundaries, such as the 15 percent maximum value, has drawn a lot of criticism for being arbitrary or too low.

“Up to this point, the utilities have pretty much managed the process,” he said, meaning that utilities such as MECO, recommend a value such as the 15 percent maximum, and the PUC approves it.

“[The Working Group] allows experts to take a look and bring new recommendations for standards to be recommended and adopted by PUC. The intention is to come up with a higher baseline,” he said, noting that the recommendations represent a “huge shift that gives us great hope.”

The PUC’s working group, which formed over a year ago, is scheduled to conclude their findings by the end of this year, said Glick.

Other studies are also underway, such as a statewide PV integration study completed by the National Renewable Energy Laboratory, which is expected to release a draft of their conclusions next month, he said.