Playing with the Pros 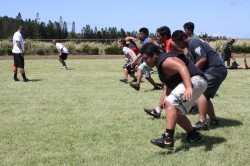 ”The team is still in its infancy, so we’re still learning,” said Farmers head coach Mike Kahale. “No need to reinvent the wheel. We’ll just get the experts to come out and show us what to do.”

These experts included Maiava and Dickson, as well as Cody Nakamura from the Maui-based football camp Hard Naks, and college football players Kaniela Tuipulotu and Kai Maiava. They are all Maui boys who found futures in football, and they volunteered their time last Wednesday to help young Molokai players reach their potential.

“We all experienced going to college for free and what the sport does for you,” Maiava said. “Coming from a similar background, we wanted to show them what’s possible.”

The team plays eight-man football as the school’s first sanctioned team since 1960. Last year kicked off the Farmers’ return to football, and during this summer and fall, the boys are conditioning for a second season. MHS wide receiver Alika Kaahanui said during the day with the pros, he learned new drills that helped his footwork.

“It means a lot to have them here,” Kaahanui said. “It’s cool we’re getting help from pros.”

This help comes alongside a training program that is rarely available on Molokai. Nakamura’s Hard Naks High Performance Speed Camps brought comprehensive training techniques that the coaches can use long after the professionals are gone. 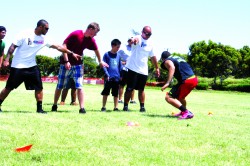 “It’s a great opportunity for our kids to learn from experts and for our coaches to sit back, observe and take notes and integrate it into our own practices,” Kahale said.

The training was tough, but spirits were high as the pros and young athletes joked around with each other, even competing against one another in drills.

“There are a few kids that for their first year playing are more advanced than kids who have been playing forever,” Maiava said. He added he would love to makes these clinics a regular thing on Molokai.

“Not everyone is willing to share football secrets, so we really appreciate these guys coming out and sharing their expertise,” said Kahale.