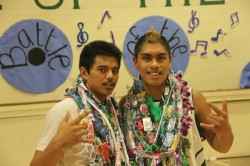 Molokai High boys basketball won the last game of their regular season over St. Anthony, as well as celebrated Farmer Homecoming last Friday. Closing the night at the Barn with a 44-40 score, the team also honored their two seniors, David Rapanot, and Likeke Schonely. The boys will play in the MIL championship this weekend.

In an effort to boost homecoming attendance and raise money for the cash-short Molokai athletics department, stakes were raised for one lucky game attendee to win $10,000 by making a half-court shot. Shirley Rawlins of Rawlins Chevron and David Mikami of Molokai Drugs donated the money, and tickets for the drawing sold for $5. 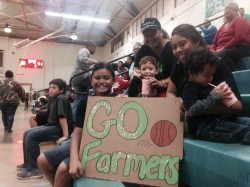 True to the odds, no one walked away with the prize money, and athletic director Hoku Haliniak said even with $10,000 resting on the basket, the event only drew a handful more fans than last year. With attendance in the 400s, it’s not what many alumni recall homecoming to be.

“We remember the days when… you couldn’t even get into the gym because it was so full,” said ’87 alum Lori-Lei Rawlins-Crivello.

But some things don’t change, and graduates will always carry Molokai with them.

“Have pride, give back, be proud of where you come from and never forget even though you graduate, you’re always part of the school,” Rawlins-Crivello advised students of Molokai High. 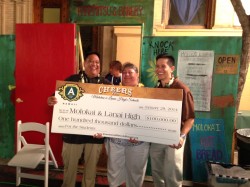 Meanwhile, Molokai High’s $32,000 athletic budget shortfall is garnering statewide support. At a fundraiser event called Cheers for Molokai and Lanai High held by the Downtown Athletic Club Hawaii (DACH) on Jan. 29, guests were entertained and served local Molokai and Lanai delicacies, including Kanemitsu bread from a replica of the Kaunakakai hot bread window. Honolulu’s Merchant Street was closed for the sold-out party, which attracted statewide attendance.

DACH President Scoot Simon presented Haliniak and Lanai Athletics Director Roderick Sumagit with a ceremonial $100,000 check at the event. Simon said they are still receiving donations and tallying the grand total, which will exceed the check’s amount.

“[DACH] was truly moved by the dedication shown by student-athletes, coaches and administrators at Molokai and Lanai high schools year after year despite incredibly difficult travel and forced sacrifices,” said Simon. “We wanted to help with immediate budget shortfalls and raise statewide awareness toward a longer-term solution.”