Playing for a Cause 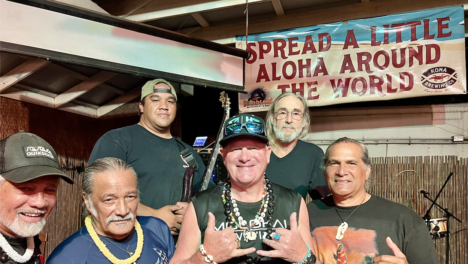 The Kalaupapa Backyard Band performed a special show last Friday night at Paddlers Restaurant and Bar. All proceeds from the tip jar will be donated to the Ukraine through the United Church of Christ and the Kalaupapa churches, Kana’ana Hou and Siloama, through their minister Richard Miller. Playing to a packed house, the band raised $850 for the cause, which will be sent to assist Ukrainians in need, being invaded by Russia.

Miller, the band’s harmonica player, is one of the founding members of KBB and will be returning to his home in Pennsylvania on May 1 after almost 20 years of service at Kalaupapa National Historical Park and the churches. Bandmate Lionel Kaawaloa who plays the spoons, with more than 30 years at Kalaupapa NHP, is now retired and lives on Hawaii Island, but visited Molokai for the show.

The two played with the band, whose other members are Keahi Hanakahi, Keoki Pescaia, Rick Schonely and Walter Naki, for what may be the last time.

“The Kalaupapa Backyard Band, until two years ago when visitation to Kalaupapa ended due to COVID-19, was formed and played in Kana`ana Hou Church,” said Miller. “This is a reunion to do our small part to help out. This is not the first benefit show the band has done.  When Puerto Rico was devastated by the hurricane, the Kalaupapa community got together and played music to raise money to aid those folks.

Paddler’s Restaurant in Kaunakakai provided a great place for folks to get together and listen to the music, enjoy a good dinner, and donate to a worthy cause.”

The following night, three of the band members played sunset music at Wavecrest and raised another $285 for the Ukraine fund.

“We can’t say enough about the generosity of the people of Molokai and we thank them very much,” said Schonely.