Fragile sand dunes of Moʻomomi on Molokai, once overrun with alien kiawe thickets, are blooming with new native growth. 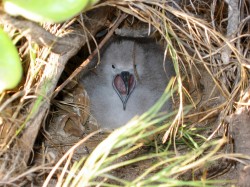 A Shearwater chick in its nest

A 14-year passive restoration program by The Nature Conservancy and the Molokai Land Trust is letting the blue blossoms of paʻu o Hiʻiaka and the yellow flowers of  ʻilima bloom amid the spiky native ʻaki ʻaki and shimmering hinahina. These blossoms are on dunes that once held single-species thickets of kiawe, a legume brought to Hawai`i to support cattle ranching.

“Kiawe transforms the ecosystem,” said Russell Kallstrom, graphical information system coordinator for the Conservancy’s Molokaʻi Program. “It forms dense thickets. If there’s a fire, it burns hot and hard. Since it’s a legume and fixes nitrogen, it changes the soil,”

Kiawe removal, when combined with predator and weed control, benefits not only native plants, some of them rare, but also the uaʻu kani, or wedge-tailed shearwater. The number burrows for this species of seabird has increased from 3 nests in 1999 to 704 nests in 2012.

“It seems like the shearwaters were trying to recolonize before 1999, but feral cats used the safety of kiawe thickets as staging areas for raids on the nests,” said Wailana Moses, the Conservancy’s Molokai weed coordinator. “When we removed some of the kiawe clumps near the bird colony, we would find piles of shearwater wings.”

The shearwaters face threats from mongooses, cats and dogs. In 2009 a single dog killed 60 shearwaters in one night. 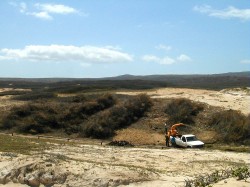 A recovery area for the Shearwaters

The Nature Conservancy began kiawe control at its 921-acre Moʻomomi Preserve in 1998, under the direction of its Molokai Program manager, Ed Misaki.

“The idea of passive restoration was to focus on removing invasive species and let the natives naturally regenerate—removing the threats and allowing the native system to heal itself, basically,” Misaki said.

The conservation crews learned as they went along. One key strategy was to remove kiawe next to intact native sand dune habitat so the natives could reclaim the open area naturally.

Another technique was to quickly paint a small amount of herbicide on the cut kiawe stump, to prevent it from re-sprouting. Still another was to use a chipper to grind up kiawe branches, creating mulch that helped the native crawling plants and inhibited weeds.

Kallstrom said the native plants do better on the northeast sides of dunes, which are blasted by the trade winds and regularly doused with salt spray. Most of the weeds can’t handle the salt. The coastal natives, however, are adapted to it.

“It’s really an amazing thing to see,” Moses said. “After the kiawe is removed and the chips cover the open area, the natives just crawl in from the outside. The ʻakiʻaki turns fluorescent green when it hits the nitrogen left by the kiawe chips.”

The kiawe occurs in patches across the Moʻomomi dunes, and the removal process, since increments must be small, has cleared a little over 9 acres in the program’s 14 years. For most of that period, it was done by Conservancy staff and volunteers, but since 2010, some of the work has been contracted to the Molokai Land Trust, which also does weed control.