Planning for a Flooded Future 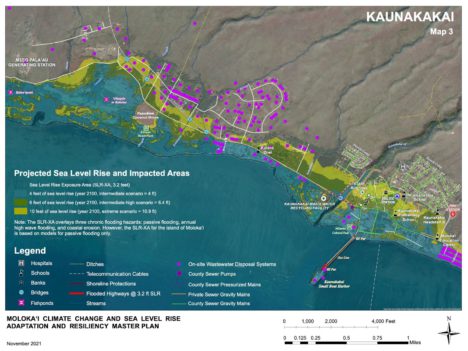 What could Molokai’s community look like in 2100? Flooded. The Climate Change and Sea Level Adaptation and Resiliency Master Plan, spearheaded by Sust’ainable Molokai, is targeted to be completed by July 2023, outlines what we can expect and how we can face this foreboding future.

The Climate Change and Sea Level Adaptation and Resiliency Master Plan (CCSLAR) is a community-led climate change and sea-level rise plan for Molokai’s future, created and fueled by Molokai’s community.

Sust’ainable Molokai’s website explains that CCSLAR has an indigenous place-based perspective, meaning the planning process is led by kama’aina and long-time community leaders.

Sust’ainable Molokai’s community engagement strategy has been implemented in five community workshops in four parts of the island – Ho’olehua, Kaunakakai, Maunaloa and Mana’e. Youth have also participated in workshops at Molokai High, Middle and Aka’ula schools. Workshops in different parts of the island allows the organization and planning process to come directly to residents’ doorsteps.

“We have started the conversation on where the town should be moved… most of the town will be inundated at 3.2 sea level rise,” said Mokuau.

Sust’ainable Molokai created detailed visual projected maps of each sea level-rise probability and affected area on Molokai in the next 80 years. The maps display the impacted areas from a calm 3.2-foot sea level rise to a 10-foot level rise with wave events, storms, and wind into account, based on scientific projections. There are indications of on-site wastewater disposal systems, sewer mains, fishponds, schools, streams, and residences. According to the maps and Mokuau, the water line in Kaunakakai would be up to the police station.

At each workshop, community members learn about the projections of sea-level rise on Molokai through maps, research and information shared by Sust’ainable Molokai staff. While individuals take in a new perspective on Molokai’s future, they also fill out surveys to share personal mana’o on what they believe will protect Molokai.

“We collected nearly 1000 surveys through in-person workshops, online surveys, and other outreach efforts and reached 2,000+ community members with locally prepared and sourced meals in the process,” according to Sust’ainable Molokai’s website.

After collecting many opinions at workshops, the detailed maps were modified to highlight the priority sites chosen by the Molokai community. The maps include priority spots like Kaunakakai Wastewater Reclamation Facility, Kaunakakai Harbor, Kamalo Wharf, the main highways, oceanfront businesses and residential, and fishponds.

“For the community, we need everyone to see the maps, see the priority areas that were chosen, and really think about what they think as far as the options that can be done,” said Mokuau.

In the next phase of creating CCSLAR, Sust’ainable Molokai is creating the mitigation and adaptation strategies. All strategies will incorporate appropriate technical land-use planning and coastal engineering expertise.

The most recent workshop was held at Kilohana. Attendees represented generational families from Kamalo to past Honoliwai. Mokuau shared how determined community members were to talk story, and give feedback about short, mid, and long-term strategies for adaptation and mitigation.

“There was a lot of support for food storage and medical storage in each community to help them become more resilient,” she said.

One upcoming opportunity to be part of the CCSLAR planning process and add your mana’o to this important blueprint for the future is approaching next weekend.

Lā Pilina is a community event hosted by Sust’ainable Molokai to engage Molokai’s community and give back decision-making power. This event will include Sus’tainable Molokai’s efforts and other ongoing planning efforts, along with music by Jeremiah and others, free food, activities and prizes. Lā Pilina will be held at Mitchell Pauole Center on Saturday, Nov.  12, from 4 to 9 p.m.