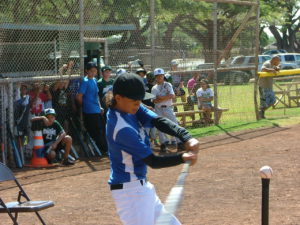 Kekaiakea Maliu one was of the Molokai youth who participated in the Pitch, Hit and Run competition.

By Mike Mangca, Dept. of Parks and Rec

On March 31, the County of Maui Parks and Recreation in conjunction with Major League Baseball held the second Annual Pitch Hit Run Competition at the Kaunakakai Little League Park. Twenty-eight participants ages 7 through 14 enjoyed themselves competing in pitching, hitting and running events. Each participant was awarded a certificate and a metal as well as snacks. Each age division had their own winner for each event. Scores were totaled up and the overall winner of each age group has the chance to compete in the Sectional round. The Sectional rounds place and time will be determined at a later date in May after all competitions are finished throughout the state.

Following are the results of the competitions: