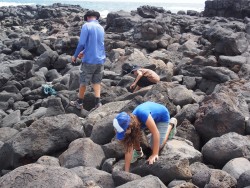 Volunteers work to clear rocks near the shore. Photo by Catherine Cluett.

Mo`omomi Beach has long been considered one of Molokai’s richest areas for natural resources. However, it’s also one of most Hawaii’s most debris-laden beaches, and last Saturday, more than 150 volunteers did what they could to remove thousands of pounds of bottles, rope and plastic rubbish of all shapes and sizes from the area.

The north-facing coastline is the first stopping point in the state for marine refuse floating from the Great Pacific Garbage Patch, according to Kahi Pacarro, executive director of Sustainable Coastlines Hawaii (SCH).

The nonprofit’s mission is to inspire local communities to care for their coastlines through hands-on beach cleanups, and for the second year, they gathered manpower and momentum at Mo`omomi to fulfill that mission.

Molokai’s geography and northern exposure to open ocean make Mo`omomi a hotspot for marine debris. Last year, Molokai residents and SCH volunteers removed about 6,000 pounds of rubbish. As of Sunday, Pacarro estimated about 4,000 was gathered this year, though a final weight won’t be available until next week.

All the trash that’s collected is transported to Oahu through a partnership with shipping company Matson, where it gets sorted. Hard, opaque plastics – which accounted for about 60 percent of last year’s poundage – will be turned into soap bottles, shoes, clothing and other usable materials.

Pacarro said his organization works with Method, a California-based company that produces nontoxic, biodegradable natural cleaning supplies with a focus on sustainability. Some of Mo`omomi’s debris will become soap bottles. Other trash from the beach will get a second life as clothing from recycled materials. G-Star Raw, a brand co-designed by musician and entrepreneur Pharrell Williams, creates denim from recycled plastic. Adidas, in partnership with international organization Parley for the Oceans, is using recycled marine debris to make shoes and will be another recipient of Mo`omomi’s trash. 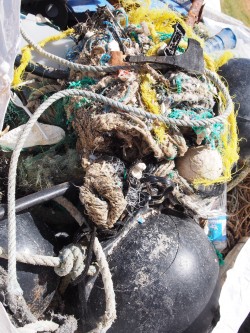 Tangled masses of rope and equipment made their way onto Molokai’s shores. Photo by Catherine Cluett.

The rubbish collected on Molokai’s coastline that’s not recycled into usable items will be burned in Oahu’s waste-to-energy facility, said Pacarro.

In addition to organizing the cleanup effort, SCH visited local schools last week and spoke to about 200 Molokai youth about plastics pollution.

“We need to refuse single-use plastics and become stewards of our coastlines,” said Pacarro. “Don’t be afraid to speak up about what you’ve learned. Parents say their kids came home and talked about [plastic pollution], so it’s working.”

Parent Gary Trenner, who came out to the cleanup with his two kids on Saturday, said that’s exactly what happened when his seventh-grader daughter Madison came home from Aka`ula School after the SCH presentation.

“She was the driving force behind us being here today,” said Trenner. “Madison said, ‘Dad, I really want to do this.’ She didn’t want to miss it. It’s nice doing something good for the environment.”

Madison exuded enthusiasm as she picked up pieces of litter among the rocks.

“It’s important to keep our oceans and beaches clean so birds and other sea creatures don’t eat the plastic,” she said. “We can use substitutes [to plastic] and reuse plastic instead of throwing it away.”

Jenny Bredeken, an SCH volunteer who came from Oahu for the cleanup, said it was great having so many come out for the effort.

“When you see more and more people show up, it’s inspiring,” she said. “It’s crazy to come here [to Mo`omomi] and there’s no one around but the beach is overly dense with trash. We’re all connected by the ocean – the trash just collects here.”

Pacarro said SCH organizes large-scale beach cleanups around the state and hopes that by actively participating in the process, people will become more aware of caring for the ocean.

“The beaches are our classrooms,” he said. “By reducing their use of these items, they can have a tangible effect on their beaches and beaches thousands of miles away… We’ve found stuff here from Japan, and if their trash makes it here, who’s to say ours isn’t going there?” 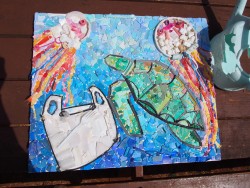 A recycled art display put litter to good use. Photo by Catherine Cluett.

Twelve-year-old Keoki Adolpho said Mo`omomi is one of his favorite beaches and that’s why he joined the cleanup.

“The six-packs from cans can get wrapped around turtles,” he said. “I use a Hydroflask because you can use it over and over… Not using plastic bottles can help save the environment.”

Along with feeling good about removing debris from Mo`omomi, participants could win prizes of coveted glass buoys by finding reusable SCH water bottles that staff hid along the coastline for a few lucky volunteers. The organization also gave away free hats to all volunteers, and the effort was followed by lunch, entertainment and games.

Pacarro said SCH plans to return each year to spearhead the cleanup, and he hopes to partner with more local organizations to bring more community members out to assist in the future.