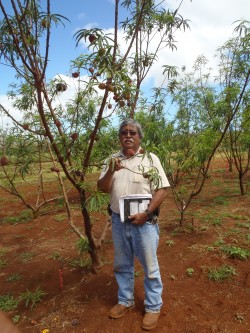 Alan Arakaki with a peach tree grown on Molokai.

Have you ever heard of peaches grown on Molokai? Until recently, such a thing didn’t exist. But research at the Molokai Applied Research and Demonstration Farm has shown that harvesting sweet, juicy, locally-grown peaches is possible.
Apples, cherries, nectarine, apricots, plums and peaches are in a group of fruiting trees called deciduous trees.  Deciduous fruiting trees are plants that drop their leaves in the winter and require exposure to hours of chill below 45 degrees F to break leaf and flower bud dormancy, a necessary physiological change in plants to produce fruit.  Some deciduous fruit varieties require as many as 1000 chill hours per season to develop fruit.  For many of us that choose to live in Hawaii, exposure to just a few chill hours makes us forget our desire to harvest our own apples or peaches from our backyard.

Problems of high chill hour requirements of peach varieties and our warm temperature are major stumbling blocks for peach production in Hawaii, according to a report by the University of Hawaii College of Tropical Agriculture and Human Resource (CTAHR) in 1973.  However, in the 1980s, researchers in Florida and Texas began breeding quality peach varieties that required low numbers — about 200 hours — of chill to break leaf and flower dormancy.

One of the varieties used extensively in developing low-chill peaches in the U.S. is a white flesh peach variety called “Hawaiian,” a variety brought to Hawaii from California in 1913 and grown in backyards of Hawaii homes.  It is the variety many local families use to make pickled peach.  Peach variety “Hawaiian” is described as low yielding, unattractive and poor quality.  But it had the low-chill genes that researchers were looking for.  Today, there are low-chill peach varieties that require less than 100 chill hours.  Even at 100 chill hours from the previous 1000 hours below 45 F, many of us would not choose to live there either.

In 2009 and 2010, we were able to select low chill peach varieties to evaluate on Molokai and other parts in Hawaii, with help from Dr. Dave Byrne, Peach Breeder at Texas A&M and Mr. Tim Gerdts of Burchell Nursery in Fowler, CA.  With the help of other Extension Agents in the state, the peach varieties will be evaluated at 50 locations with different temperature zones and climatic conditions.  Soon, we will be able to learn more about the fruiting range of these low-chill peaches.

In May of this year, we began learning that some of the varieties potentially will fruit at zero chill hours.  The peach varieties planted in 2010 at the Molokai Applied Research and Demonstration Farm dropped their leaves in early December, blossomed in January and February, and produce mature tree-ripened fruits in May.  However, unlike some of our tropical fruits like mango that has prolonged fruiting season, fruiting season for the peaches ended as quickly as they came in June.  Whether this year was a peach anomaly or a low-chill genetic achievement and signature that we can expect every year, we will definitely learn more about their habits and degrees of fruit productivity in years to come.

I’m happy to report that I was able to harvest tree-ripened peaches that were juicy and sweet on Molokai without exposing myself to temperatures below 45 F.

2 Responses to “Peaches on Molokai”