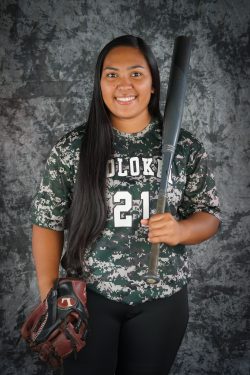 On Molokai, many grow up living the baseball life and Felicity “Wehi” Pastrana has excelled at softball and baseball since she can remember.
“I cannot remember a time, where I was not at a baseball park. I practically grew up or lived at the Little League Park,” she said. “My brother started playing Little League at the age of 5, the year I turned 1, and ever since then I was always at the park.”

With the current COVID-19 times, spring sports were cancelled, and the Lady Farmers Softball season was not to be but Pastrana will continue her softball career at the college level at Clackamas Community College in Oregon City, Oregon in the fall.

“From a young age, my dad and my mom [Kalei and Lori Pastrana] had me training and playing baseball with my older brother,” said Pastrana. “When I was 5, I played for the Rangers club with the Molokai Little League as well as the County of Maui’s Baseball Instructional Camp. I played baseball until I was 13 years old and had various coaches (my dad, Keola Young, Mando Habon, Maka and Kalehua Augustiro, Taylor Kaawa, Noah Horner, Ikaika Faraon, Ken Nakayama, Nate Starkey, Kimo Paleka, Benny Venenciano, and many more.”
Molokai is known as a baseball factory and the community takes the sport seriously but always has fun with the sport. After Little League baseball, Pastrana got some good coaching and moved to fastpitch softball.

“The year I turned 13, I was invited by Uncle Kawehi Horner to play softball with his ‘One Love’ team,” recalled Pastrana. “That year we played in the Lahaina Invitational Tournament. A few weeks after the tournament, my parents signed me up for a camp with the Northwest Fastpitch. There I was invited by Coach Dennis Harmon and Coach Kaimi Kekahuna to play for the Maui Titans DeMarini. I have played for the Maui Titans Softball club every summer since and have had the opportunity to enter college camps and many tournaments in Washington, Oregon and California because of this great opportunity. When I became a freshman, I tried out for the Molokai High School softball team and have played as a Utility Player.”
Molokai Softball Head Coach Lacey Santiago knows that Pastrana has what it takes to excel at the next level.

“Wehi is a great leader and someone you’d definitely want on your team,” said Santiago. “She was the powerhouse of our team and I looked forward to seeing her on the field one last time. I just want her to know this, do not ever give up because anything is possible, even for us savages who come from Molokai where many do not get the opportunities to move beyond the high school level. So, when you get a chance, you take it. Anyone who gives you a shot, take it because we will not know when it’ll come again, and you make the absolute best of it.” 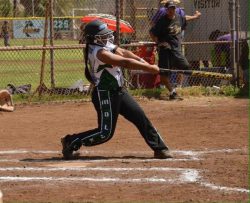 Santiago is also proud of her player’s off the field accomplishments.
“I’ve had the pleasure to coach Wehi since she was a freshman,” she continued. “She has always been extremely successful in the classroom and her growth in this ball game is out of the park. She is one of the most humbled, hardworking, and independent young ladies I have coached. I’m beyond proud of her.”
Pastrana has been raised by her family, her community and the whole island of Molokai and now she will spread her wings and fly.
After community college, where she plans to pursue a degree in biology, Pastrana hopes to transfer to a four-year university in Oregon to continue her education.