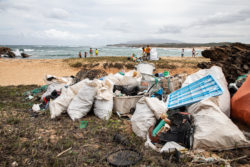 Despite the large annual Mo’omomi marine debris cleanup being cancelled this year due to the pandemic, a recent effort spearheaded by Hawaii nonprofit Sustainable Coastlines removed more than 25,000 pounds of trash from Molokai’s north shore. Using helicopters to airlift enormous sacks of rubbish from remote areas that had previously been collected, along with limited volunteer efforts to gather more debris, millions of pieces of plastic that had washed ashore will now be removed from the island and recycled or properly disposed of.

Rafael Bergstrom, executive director of Sustainable Coastlines, said a huge volunteer effort last August had gathered and bagged thousands of pounds of debris in remote areas of the coastline that had to be collected by helicopter. The airlift removal had been scheduled for March but was cancelled when the pandemic hit. However, it had to be removed before rough winter weather made it impossible to retrieve.

With that limited timeframe quickly closing in, a limited group rallied to make it happen.

“We wanted to be respectful of the Molokai community and not bring a bunch of people from Oahu [for the cleanup],” said Bergstrom. So they made it happen with limited numbers. “Some of us from Oahu got our COVID tests and came over,” he added.

What can we do to help our plastic trash from polluting the ocean?

“We have to do everything,” said Bergstrom. “That means cleaning up, stopping fossil fuels from producing plastics in the first place and thinking about alternatives.”

While Bergstrom said so much of the debris that washes up on Molokai’s coastline comes from other parts of the globe, it’s still important to change our habits — and Molokai is actually ahead of the curve. 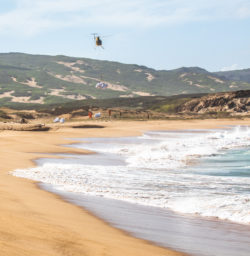 “A lot of what we see washing up on the beach is from the commercial fishing industry,” he explained, such as nets and plastics that get tossed during deep sea operations. “The U.S. drives a lot of demand for commercially sourced fished but a lot of people on Molokai use subsistence fishing practices — that’s part of the bigger solution to use a subsistence model [to reduce commercial fishing]… It’s daily life changes that we may not immediately connect to plastic that will actually help reduce plastic pollution in the future.”

Though this year’s cleanup that typically draws hundreds of volunteers to clean the Mo’omomi coastline was cancelled, Bergstrom said as soon as it’s safe to resume, they’ll organize it again.