For 30 years, Lyle Likua has been responding to emergencies on Molokai as an emergency medical technician (EMT) and paramedic. But it was a high point in his career when he was joined on the job by his son, Keku Likua, last week — the first time they worked side by side on the same shift as licensed paramedics. 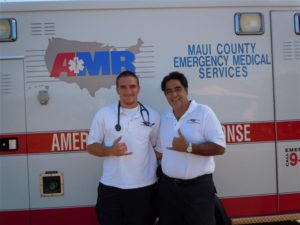 At age 22, Keku is currently the youngest paramedic in the county, having received his promotion from EMT in April. Now stationed in Kahului, he was assigned to fill in a shift on Molokai last week, making it a proud day for his dad.

“[Many of us] have been here over 30 years, and we’re happy to see upcoming local young adults carry it on,” said Lyle. “We’ve established a rapport with the community. There is comfort in knowing them — on the way to a call, we already understand the patient’s medical history [because it’s such a small community], so there’s less anxiety for both the patient and us.”

Keku, a 2007 Molokai High School graduate, hopes to carry on that tradition.

Shortly after graduation, he began rigorous education and training to enter the emergency medical field. Beginning with prerequisite classes at UH Maui College, he was accepted into an eight-month EMT program and became state licensed. After working for about two years in the field, with 200 to 300 911 calls, he passed a medical entrance exam and oral evaluation for admittance into a 16-month paramedic program.

Lyle described Keku’s paramedic certification program as “intense,” studying for 8 hours per day, five to six days per week. Three of those months were spent on Oahu, staffing an ambulance in Honolulu under the watchful eye of supervising paramedics.

Keku successfully became a paramedic, spurred by what he describes as a love of his job.

“I want to come to work every day,” he said.

Both father and son agree there’s never a dull moment.

“It’s never the same call,” said Keku. “You have to act in routine and non-routine situations.”

Lyle said it was the excitement of the job that got him into it. When he entered the field in 1980, the paramedic program was still in its infancy, having been established in Hawaii in the early 1970s. And while his son had to go through years of training, Lyle said in his day, he learned on the job. A native of Maui, he got stationed on Molokai in 1983 and made it home.

Though he grew up watching Lyle work as a paramedic, Keku said he did not simply follow in his dad’s footsteps.

“I talked to other people in the medical field [and it impressed me] how much they loved their jobs,” he said.

Keku’s goal is to eventually come home “to serve and help the people of Molokai,” in the words of his grandmother, the late Grace Carlington. She wrote a draft of an article about his accomplishments, but never finished it before she passed away last month. Her pride shone through as she wrote of his efforts to become a licensed paramedic — a goal he has now accomplished.

Keku said he would encourage other Molokai High graduates to pursue a career in the medical field, adding that passing the prerequisite classes will serve you well in other programs even if you do not choose to become a paramedic.

But most importantly, he stresses the importance of having a job you enjoy.

“Find something you love to do and pursue that goal,” he said.