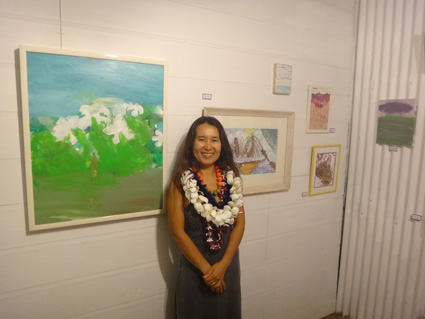 Contemporary artist Miyako Yamazaki has had her fair share of success as an artist. She has worked as a fashion illustrator for companies like Christian Dior and Barneys New York, designed packaging for Japan Airlines, been featured in big galleries in Tokyo and is a published author of two books. However, she said her aspirations in life were never to be widely rich or successful, but instead, what she really wished to do was to “paint like a child.”

She moved from her hometown of Tokyo to Molokai in 2004 and became a mother, two shifts that she says have changed her art and her life. She describes the art she does now, often alongside her two daughters, as contemporary, abstract and even “child-like.”. 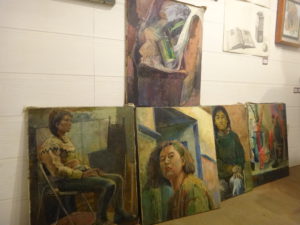 Portraits Yamazaki painted as a teenager. Photo by Eileen Chao.

Her exhibit, “1987-2012 –A Retrospective,” is currently on display at the `Ike Lihi Gallery at the Molokai Arts Center (MAC), until Oct. 21. The exhibit features some of her latest contemporary pieces in conjunction with pieces throughout her artistic career, including detailed, realistic and life-like paintings she did when she was in high school. These works from her past, which she said she had originally wanted to throw away, provide a stark contrast to her more recent work, thus offering a retrospective into her progression as an artist. The exhibit also features the work of Miyako’s four-year-old and seven-year-old daughters.

“I don’t have huge aspirations to be successful now, I’m just a mother,” said Yamazaki. “This exhibit shows both of those.”