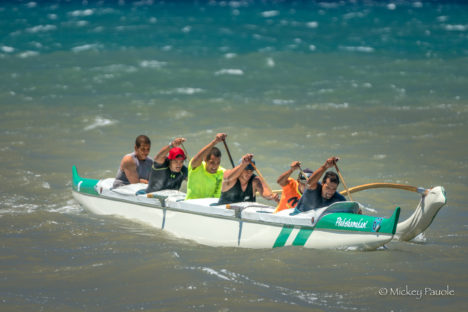 Hundreds of paddlers from Hawaii and around the world crossed the finish line of the 26-mile Pailolo Challenge last Saturday at the Kaunakakai Wharf. Among the teams tackling the race — which starts on Maui and crosses the channel to Molokai — was Molokai’s own Wa`akapaemua men’s open crew, which finished in eighth place with a time of 2 hours 46 minutes 42.36 seconds, pictured here. An afterparty at Kaunakakai Wharf featured music, entertainment and food, as well as compostable alternatives to single-use dining products, provided by Sustainable Island Products, in partnership with Sust`aina ble Molokai collecting compostables and recyclables to minimize landfill impact.

The Pailolo is organized each year by the Hawaiian Canoe Club, whose mission is to perpetuate and preserve the cultural traditions of the sport. The crossing of the Pailolo Channel has also been called “the world’s funnest canoe race,” according to their website. The Pailolo precedes the Ka`iwi channel races to Oahu, with Na Wahine o Ke Kai being held this Sunday and the Molokai Hoe following on Sunday, Oct. 8, both leaving from Molokai’s Hale O Lono harbor.