The Kaneshiro family knows the value of hard work — and so do their bees. The saying “busy as a bee” is not just a cliche.

“It takes the lifetime of 12 bees to make one teaspoon of honey,” said Brenda Kaneshiro, whose family operates Molokai Meli, the only commercial apiary, or collection of bee hives, based on the island. “Every drop of honey is like gold.”

Left to right, Denny, Brenda and Elijah Kaneshiro and their bees. Photo by Catherine Cluett

What began in 2004 as a hobby to produce enough honey for their son’s salad dressing business turned into commercial operation producing over one ton of Molokai honey annually at its peak just three years later. Along with marketing on Molokai and around the state, the Kaneshiros have shipped their honey to such international destinations as France, Germany, Japan, Hong Kong and Korea.

“It gives us the ability to produce something that came from Molokai that people from around the world view as exceptional — it brings back credit to Molokai,” said Brenda.
“People tell us around the world this is the best honey they’ve ever tasted.”

A true family business, Brenda and her husband Denny are assisted in beekeeping by their children.

“Growing up with a honey bee farm has taught me the value of hard work. Even if I don’t feel like working, if there’s work to be done, I need to do it,” said their son Elijah. 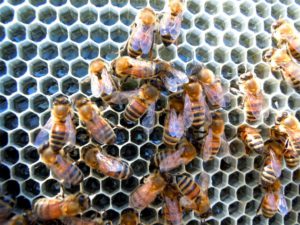 There’s a lot that makes Molokai Meli honey special. While most honey has widely-touted health benefits, the Kaneshiro’s honey is raw and unfiltered, which means it retains natural enzymes, nutrients and pollen particles.

“My friend had been using our honey in his oatmeal every morning,” said Denny. As a diabetic, his doctor noticed his condition had improved and asked what he was doing differently. “He told him he was eating a tablespoon of honey every day.”

“We had one lady call us who had been ordering five jars of honey per month from our website,” added Brenda. “We thought she was giving it as gifts, but she told us she was eating it all herself. ‘I lost 30 pounds in two months,’ she told us — she replaced all of her sugar with our honey.”

“The best part about keeping bees is eating the honey!” said daughter Esther of her family’s business.

The Kaneshiros’ bees produce pure kiawe honey, which, in addition to the health benefits, is particularly renowned for its premium taste.

Long-time Oahu beekeeper John Dalire, who helped the Kaneshiros get their start in the industry, calls the flavor of their kiawe honey “smooth and delicate.” His wife, Linda Kawamoto-Dalire, who distributes Molokai Meli products at Oahu farmers markets, said their honey is so popular there’s often a waiting list.

“[The Kaneshiros’] premium silky is very special type of honey,” she said. “People love it.”

Molokai Meli offers several different types of honey, which are processed at the certified kitchen at Lanikeha in Ho`olehua. Comb honey is sold as the bees produce it — still in the wax cells. “Premium Silky” honey is an extra-creamy, white honey — one of Molokai Meli’s most popular products. Another customer favorite is Meli Stix, or honey sticks, a fun and convenient way to enjoy honey in straw-like packaging.

On Molokai, these products are sold at Kamakana Country Store, Kumu Farms, The Outpost Natural Food Store and Art from the Heart.

“[Their honey] is so popular that it’s one of the things I let [visitors sample] if they want a real treat,” said Jule Kamakana, owner of Kamakana Country Store. People’s reaction is always “it is so fantastic!” she added.

About 70 percent of Molokai Meli’s sales come from various farmers markets on Oahu, where the majority of honey is taken to Japan by tourists, according to Brenda. Their honey is also sold to chefs through a restaurant supplier on Hawaii Island, where their honey comb is on the menu of the Four Seasons resort restaurant.

Molokai Meli’s products are also available through their website, RealHawaiiHoney.com.

To supplement the honey business, the Kaneshiros also offer bee removal services to local residents and businesses when unwanted colonies from buildings or near homes.

The Bees
Aside from staying “busy as a bee,” honey bees live in highly-organized colonies in which each bee has a specific task within the hive. They have an elaborate system of communication, social class, and work ethic. An average hive houses 50,000 to 60,000 bees, according to Brenda. 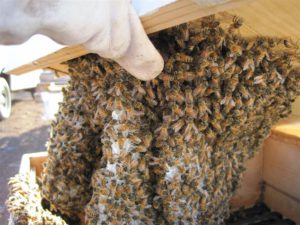 Each hive usually consists of one queen bee — whose lifespan lasts from two to four years — drone bees, or fertile males, and sterile female worker bees — whose lifespan is usually about six weeks, according to Brenda.

Honey is produced by bees as a food source. It’s the job of worker bees to find nectar, make honey, build the wax combs and tend the eggs and larvae. Bees can travel up to five miles from the hive foraging for nectar. The type of honey produced depends on the nectar source. Kaneshiro’s hives are located in a kiawe grove, so the bees produce exclusively kiawe honey.

When worker bees find a good source, they communicate its location to each other by performing a dance — a circular movement in the direction of the nectar in relation to the sun. They wag their bodies with an intensity that is direct correlation to the quantity of the discovered blossoms.

The bees bring the nectar back to the hive, where they deposit it into octagonal wax cells inside wooden frames the Kaneshiros insert into the hives. There, the bees fan the nectar with their wings to dehydrate the liquid, according to Brenda, and it is transformed into the thick, sweet substance known as honey.

“Once it reaches the perfect state of honey, the bees cover the cell with a thin layer of wax. That tells us that the honey is ready to be harvested,” she said.

Harvesting itself is a production. Donning bee suits that cover them from head to toe, the Kaneshiros first release smoke around the bees to calm them down. The smoke not only masks alarm pheromones released by guard bees but also sends the bees into survival behavior of clustering around the honey and eggs rather than leaving the hive.

Once harvested, the family uses special forks to remote the thin layers of wax from the honey cells by hand. The honey comb-filled wooden frames are placed into an extractor, a machine that uses centrifugal force to pull the honey out of the frames. The extracted honey then drips through layers of screening to remove unwanted wax and other particles before it’s bottled.

Worker bees also collect flowers’ pollen on their legs, which not only fulfills an essential role in the pollination of crops but the substance is also used as food for the bees along with the honey.

“Bees’ diet is similar to humans’ — they eat carbohydrates — honey — and protein from the pollen,” said Denny.

The Kaneshiros have also noticed that each hive has a distinct personality — the bees living in some hives are more aggressive than others, which they believe depends on the queen. They said the more aggressive hives often produce more honey.

Bees are constantly working, said Brenda. Even at night, when they remain inside the hive, they don’t rest but fan their wings to maintain the hive’s temperature at 98 degrees.

While many beekeepers take as much honey as possible and feed their bees sugar water to replace the honey they harvest, the Kaneshiros always leave enough honey for the bees to eat.

“We treat our bees like our kids — we wouldn’t feed sugar to our children, so why would we feed it to our bees?” said Brenda.

The Challenges
In 2009, the fire which burned about 8,000 acres on Molokai also destroyed most of the Kaneshiro’s hives. Benda said they are still trying to recover and rebuild the hives — they currently have nearly 70.

Another challenge has come in the form of small invasive hive beetles, which are deadly to honey bees. The beetle first, which began attacking the Kaneshiro’s hives on Molokai last year, damages the comb and honey and may cause the bees to abandon their hive.

The introduction of the small hive beetle has made operations much more labor intensive and expensive because the Kaneshiros must check their hives every few days and place traps inside to control the beetles.

“That means our cost is much higher, but we can’t increase product prices — it’s a hard spot,” said Brenda.

The Kaneshiros have become involved in beekeeping education programs for homesteaders offered through the UH College of Tropical Agriculture and Human Resource’s Molokai extension office.

“[The Kaneshiros] had the bee experience, and I had homestead clients with farms who needed bees to overcome poor pollination… in order to survive,” said Jennifer Hawkins, Jr. Extension Agent, who has run the programs.

Another challenge for the family business has been maintaining their organic status. While they are no longer certified organic, Molokai Meli has continued to produce honey by organic standards. Before 2008, one of those standards stipulated that hives must be kept outside a two-mile radius of genetically modified crops, produced on Molokai by Monsanto. In 2008, that number doubled to a four-mile radius, which meant the Kaneshiros had to consolidate from three locations to one — several miles east of Kaunakakai.

The History
Honey production has a long history on Molokai. The island used to be Hawaii’s largest producer of honey, and, according to “Puleo`o – The Story of Molokai,” published in 1936, Molokai had the world’s largest apiary.

The annual production of the industry was 200 to 300 tons of pure kiawe honey, from thousands of hives around the island.

In 1904, Molokai Ranch bees produced over 900 cases of honey, which was sold on the mainland and even Australia, according to “Mo`olelo O Molokai – A Ranch Story of Molokai.”

These records, compiled by local historian Arleone Dibben-Young, tell that in 1937, disease swept through the bee population, and over 2,000 hives were destroyed in an effort to control its spread.

While the height of the Molokai honey industry met an untimely end, the tradition is carried on today by the Kaneshiro family, whose hard work — and that of their bees — spreads the sweet taste of Molokai around the world.

2 Responses to “One Sweet Bzzzness”