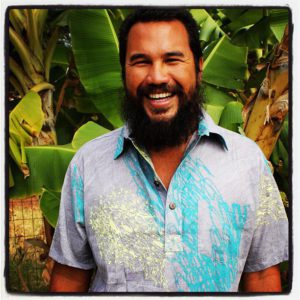 After the legislature’s controversial last-minute passage of Senate Bill 2785, which created the regulatory framework for an interisland undersea electric cable, I Aloha Molokai (IAM) President Kanohowailuku Helm felt the need to fight. The Molokai local recently filed with the state Election Office to run as an independent for Hawaii’s 7th Senate District seat, and said he’s after one simple policy: honesty and transparency in government.

“It’s not anything I ever thought I would do, but I’m pushed to do it because I love my people…It’s time for [my generation] to step up and bring a change,” Helm said.

Helm’s organization, IAM, is committed to the opposition of any development that would lead to the installment of large-scale wind farms on Molokai. IAM’s mission is to raise awareness and make the voices of Molokai heard in this “modern day David [and] Goliath story,” according to their website. Helm hopes that his step into the political spotlight will be a move in the right direction for keeping Molokai Molokai.

“Instead of staying on the outside and throwing stones, I say maybe the best way is to be a part of the process,” said Helm. “[We need] to work with the legislatures and go through the right channels and at the same time get our message out and actually try to pull the public in so they can be heard as well.”

Helm’s ultimate vision for Molokai is the development of a local government. Because the government is so far away from Molokai, he said, many people get frustrated trying to make their voices heard. He said a local form of government would make the process much easier to protect the local way of life.

Though this would be the first time Helm has ever held an official seat in office, he is no stranger to political processes or agendas. As a representative of IAM, he has spoken out against wind turbines and undersea cables in state legislative meetings as well as in videos addressed to policy makers that have since been widely circulated around the state.

“[A senator’s] kuleana is to make good decisions and to communicate with the people [he] represents,” said Helm. “The political side, I admit I have a lot to learn, but as far as communicating with the people, I don’t think I’ll have a problem with that.”

Helm’s family is also full of familiar faces in the Hawaii political scene, from his uncle George Helm, an activist and leader of the Aloha Aina movement, to uncle Larry Helm, who has lobbied on behalf of veterans’ rights. Kanoho said his father, Adolph, always taught him to care for the land and the people.

Irregardless of the outcome, Helm said the campaign is “a good thing” because it gives him an opportunity to set an example for his generation of Molokai residents.

“I have a platform to speak not just locally but outside [Molokai] as well,” he said. “And If I can help along the process of getting the island…thinking about creating some local form of government, that’s a plus.”

Helm will be running against the Democratic incumbent Senator J. Kalani English, as well as fellow Molokai resident and former president of the Molokai Chamber of Commerce, Barbara Haliniak, in the primary election on August 11.