Editor’s note: This photo was contributed by Ted Kanemitsu through the Molokai Dispatch Facebook page, with the caption, “Sometimes getting the best view requires taking risks.” 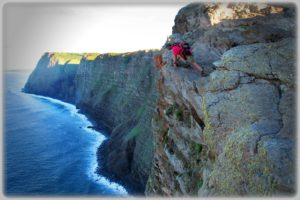 My reason for sharing my images with viewers of the Dispatch Facebook page is because I know that there are many locals and visitors alike who cannot be here as much as they would like. A glimpse of home, especially during long, hard winter months, warms the heart and the soul. It makes one appreciate what we have even more.

On this particular day, I was hiking along the north shore sea cliff with my dog Pokahu. I found this neat little ledge that I was able to get to, and started taking pictures. As I scanned the terrain for photo ops, I thought how neat it would be if I could get a shot of myself looking down with the cliffs as a background. I put the camera on the tripod and set the timer for 10 seconds and scrambled over to the pre designated spot. I think it took two or three shots to get the one I wanted. I lost my lens cap there that day. It ended up going over the edge.