It was a heartfelt farewell for ‘Ohana by Hawaiian last Thursday at Molokai’s airport as the airline departed on what may be its final flight from Molokai. Kupuna in wheelchairs held signs begging the airline to continue flying, while crew and Molokai ‘Ohana employees hugged and the airport fire department showered the plane with an arch of water as it taxied away.

The airline first announced last October it would suspend service to Molokai and Lanai on Nov. 1 after low travel demand caused by the pandemic “triggered a labor provision in Hawaiian’s pilot contract affecting the carrier’s ability to provide ‘Ohana by Hawaiian service.” The federal Dept. of Transportation then required the airline to provide 90 days notice of service termination, citing Essential Air Service status for Molokai, a federally-regulated program that ensures rural, under-served communities get adequate air service. The DOT went on to approve Mokulele as the EAS carrier for Molokai, and ‘Ohana suspended service on Jan. 14. 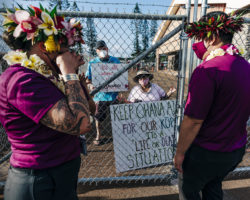 About 30 passengers, including about eight in wheelchairs, disembarked from ‘Ohana’s last flight from Honolulu last Thursday, and each were given lei by crew and employees. As the plane was reboarded for its last departure from Molokai, ‘Ohana crew danced hula as passengers walked by on the tarmac to the plane’s ramp. Flight attendants exchanged fond words through the chain-link fence with frequent kupuna passengers, and Molokai employees tearfully hugged before the crew boarded.
‘Ohana by Hawaiian, operated by Empire Airlines, began service to Molokai in the spring of 2014.

‘Ohana’s 10 Molokai employees, as well as nine TSA workers on Molokai, will no longer have jobs, though officials from both companies did not return requests for comment on the status of Molokai employees. 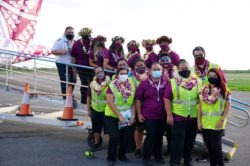 With Mokulele as the only remaining airline serving Molokai, wheelchair-bound travelers are concerned for how they will travel for medical appointments on Oahu. Mokulele has installed wheelchair lifts, but requires passengers to be able to take a few steps from the lift to the rear seat of the nine-seat aircraft. If a passenger isn’t able to take those steps unassisted, the airline will allow a travel assistant to fly free of charge, who can assist in case of an emergency.
“Mokulele has worked to address concerns from the community following the announcement of the planned exit of ‘Ohana Airlines last October,” Mokulele said in a statement last week. “In the past, there have been some challenges transporting passengers with limited mobility. To solve that issue, Mokulele commissioned the construction of wheelchair lifts to ease the boarding process for these passengers. Lifts are now in place and have been used over the last two months.”

Community members expressed gratitude for Mokulele’s efforts, but many kupuna say it just won’t work for them.
At the airport last Thursday, Earline Johnston, seated in a wheelchair, carried a sign that read, “Keep ‘Ohana Air for our kupuna — it’s a life or death situation!”

A group of concerned kupuna and community members gathered with signs showing both appreciation for ‘Ohana’s service and grave concern for their departure.

“‘Ohana means family and no one gets left behind!” another sign read, held by a wheelchair-bound resident.
“It’s important, because this is my great aunt, my other aunty…” said Kalani Johnston, Earline’s son, looking around at the small group. “We have 53 family members that depend on this airline from Molokai. We need this transportation, they can’t bend to get in a little plane like Mokulele. It’s not one want, it’s a need, it’s a necessity.”
Resident Marc Aquino said he came to hold a sign in memory of his mom, who he carried for almost seven years when she became debilitated, pointing out the hardship not only for kupuna but caretakers as well.

“My message to ‘Ohana: You quit, you carry our loved ones,” said Aquino. “I don’t care if they are 300 pounds or paralyzed or whatever. When I used to carry my mother, take her to the doctor in Honolulu, I’m ever grateful for ‘Ohana for all they have done for us.”

Earline Johnston is not new to the challenges of traveling from Molokai.

“As kupuna, how we going to fly out? I been through this kinda long already…. Monday was my last day to fly over to Honolulu to see my cancer doctor.” She is now in remission, but took countless flights on ‘Ohana for treatments.
She also used to take the ferry to Maui for work seven days a week for 12 years. The ferry shut down, and now ‘Ohana, too, she said.

Peter Ingram, president and CEO at Hawaiian Airlines said, “we are disappointed at being unable to avoid the service suspension.”

The labor provision necessitating the suspension, prevents Hawaiian from offering ‘Ohana by Hawaiian flights – which are operated with turboprop aircraft by Empire Airlines as a third-party feeder carrier – when interisland Boeing 717 and Airbus A321neo jet flights operated by Hawaiian’s pilots are severely reduced, the airline said.
Though the airline said it plans to resume service once demand increases, that’s unlikely to hap-pen any time soon.
In the meantime, Mokulele says is has also made “alternative boarding procedure and seating configuration designed to accommodate persons-of-size,” another concern of Molokai residents.

Mokuele can now transport passengers weighing up to 400 pounds; however only one passenger weighing more than 350 pounds can be accommodated per flight.

“Mokulele Airlines has gone beyond normal business practices to serve Molokai and Kalaupapa during the pandemic,” said Richard Schuman, Executive Vice President of Mokulele. “Prior to COVID, we were offering departures to and from Molokai every half hour, and we are ready to rebuild to that schedule as the demand increases.”

Booking of fights for passengers of size and limited mobility must be done by calling Mokulele’s Call Center at (808) 495-4188.