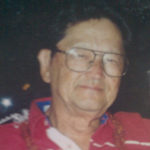 In 1945, he served in the Army for two years in the Philippines. Upon returning, he decided to attend the National School for Meat Cutting in Toledo, Ohio and later resumed working at Misaki’s. He was an active member of Kalaiakamanu Hou Church and was the general chairman for the building committee that built the Sunday school and parsonage in 1965. He also served as a deacon.

Mike had a passion for life and enjoyed fishing, hunting and golfing. He traveled throughout Europe, the mainland, Canada, Mexico, New Zealand, Puerto Rico and Japan. However, when he returned, he would always say that there was no place like Molokai. He loved it here and the people of this island.

All monetary gifts will be donated to the Alzheimers Association.