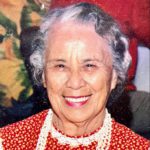 Aunty Noe was a Ho’olehua homesteader for 72 years and was employed by the Hawaii DOE serving as the school secretary at various times over 32 years at all of the public schools on Molokai. An often-repeated story from her days at Maunaloa School was when truant children were found at home and led to school in line behind an officer on horseback.

Aunty Noe and Raymond Ornellas, her first husband, founded and built Grace Episcopal Church in Ho’olehua along with the Richard Hanchett family and various families from Kualapu’u, Kaunakakai and Kalae. After the passing of her first husband, Noe Ornellas married widower E.Loy Cluney, a former Molokai Police Chief and Maui County Councilman, 1969-1978.