NOAA Proposal Aims to Save Coral

The south shore of Molokai boasts one of the largest fringing coral reefs in Hawaii, providing a home for fish, a draw for tourism, shelter from ocean storms, and sustenance for the local economy. Coral is fragile, though, and biologists fear these valuable organisms could be extinct by the year 2100. This is why the National Oceanic and Atmospheric Administration (NOAA) proposed to list 66 species of coral as endangered or threatened, an action that could protect the island’s reef. 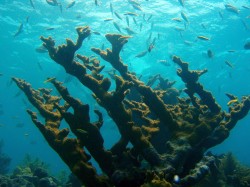 Elkhorn coral is an icon of the Florida Keys, but was listed as threatened under the Endangered Species Act in 2006. Photo contributed by NOAA

These two species and their impact on the ecosystem and the island are substantial enough to elicit concerns and questions at last Monday’s public hearing on the proposal.

“[The coral] impacts our lifestyle, our food chain, our culture, and our fishing practices,” resident Artice Swingle said. “It concerns everything.”

Lance Smith of NOAA’s Pacific Island Regional Office explained that the coral species’ potential acceptance onto the federal Endangered Species Act (ESA) list will not affect recreational activities such as diving or fishing.

Instead, the listing will restrict harm, transport or removal of the species and reduce impact from federal projects. Additionally, the act aims to develop recovery plans and fund local fisheries and wildlife agencies.

Smith said the top three threats to coral species – rising ocean temperatures, ocean acidification and coral disease – are global threats and are hard to manage. The other 16 threats Smith identified are local ones, such as sedimentation caused by upland erosion and poor land management, which are easier to manage and could impact the rescuing of the coral.

“The bottom line is that heavy populations of coral have declined,” he said. “The best we can say right now is that we know human beings don’t play well with coral reef. It’s as simple as that.”

Community members who attended last week’s meeting at the Mitchell Pauole Center expressed hope that protecting the coral could help prevent the state’s proposed undersea electric cable, which would transport energy generated from industrial wind turbines on Molokai to supply Oahu. The cable has caused environmental concerns, especially among Molokai residents, for its potential damage to the reef and infringement on the humpback whale sanctuary.

However, NOAA Deputy Regional Administer Lisa Ku`ulei Croft said NOAA rarely has the power to halt that type of project.

Eric Brown, a marine ecologist at the Kalaupapa National Historical Park, said the corals will adapt and grow around the cables.

“What you have to do is make sure nothing’s left over that causes ongoing damage,” he added.

NOAA representatives were vague about exact plans to protect the species, but one of them was mitigation, a conservation tactic that would compensate for coral loss by creating, restoring or enhancing habitat areas for it to grow elsewhere. The idea was not well received by community members.

Brown said the National Park Service utilized mitigation when renovating the park’s harbor in 2008 to make up for the losses and damages to marine wildlife the project caused.

“Mitigation has always been an ugly word for me, because it never seems to work,” said Cheryl Corbiell, a member of I Aloha Molokai, a local group that opposes the cable and wind project. “They keep calling it mitigation when the bottom line is that they are destroying it.”

Croft said 59 of the 66 species under consideration for the listing are in the Pacific Ocean, and the remaining seven are in the Caribbean.

“NOAA has never done anything on this scale before,” Croft said. “If NOAA accepts these 66 species, it will double the number of species we protect under ESA.”

Public hearings in the Pacific Island area will continue through Feb. 15, and NOAA will finalize a decision in December of this year. The deadline for submitting a comment on the proposal is March 7.

Comments can be posted online at regulations.gov by entering 0648-XT12 or by mail at: